First off, a shout out to the early adopters who have already started following Woodgrain Wonderland since its soft launch earlier this week. I apologize for the lack of screenshots and other graphics at this point – I’m kind of rolling this thing out slowly. Let’s pick up where we left off.

Just to make myself clear, I’m not someone who equates an exceptional challenge with a bad game. Metroid and Donkey Kong can both be hard as hell but they’re both awesome. There’s a big difference, though, between “difficult” and “unplayable.” Airlock falls into the latter category. You’re caught on the bottom floor of a sinking ship (any actual graphical similarity to the concept is entirely coincidental)) and your goal is to collect two keys in a specific order, climb on the elevator and repeat the process on the next floor. Even with the pathetic graphics, the game still could have been fun if not for the fact that it’s basically impossible to accomplish your tasks in the 10 second allotment before the kill screen – your man simply moves too slow, even on the easiest setting. The Video Game Critic says Airlock could be “the poster child for the 1983 video game crash” and I’m inclined to agree. F 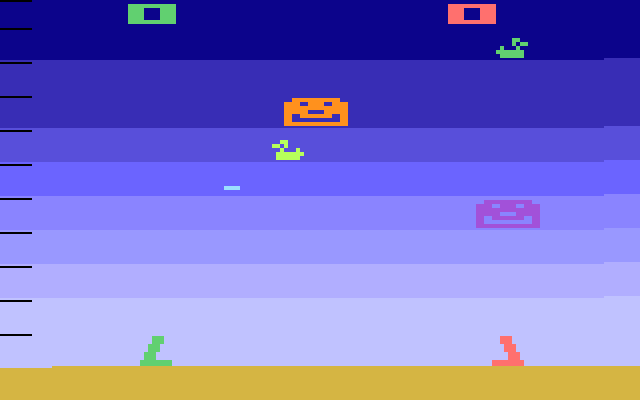 Now this is more like it. When it comes to chilling out, some people like ice fishing – I prefer Air-Sea Battle for the Atari 2600. It’s simple, addictive and challenging with just enough game variations to keep things interesting. Yes, it’s crude and elementary (this was a 2600 launch title, after all), but darn it, there’s just something so gratifying in this game when you get the timing and angle of a shot just right. There are six general modes of gameplay (anti-aircraft, torpedo, shooting gallery, polaris, bomber, and polaris vs. bomber). You can also adjust for obstacles and guided missiles. Most variations are two-player, but it doesn’t really matter because it’s not one-on-one competition such as Combat or Pong – it’s still fun even if you’re just trying to top your score. Like a lot of these early 2600 titles, your own mileage may vary in terms of your tolerance for the game’s minimalistic sounds and graphics, but give it a chance and you may be pleasantly surprised. B+

At first blush, it seems like a wasted opportunity to attach what is essentially a Pac-Man clone to a licence like Alien. On the other hand, it would have been pretty hard to capture the terror of the 1979 film in an Atari 2600 game, so maybe that’s just as well. The good news is that Alien is a quality Pac-Man clone, and considering the disaster that was Atari’s own version of Pac-Man, Alien served a very real purpose back in the ‘8-2. There are some nifty extras, including a flamethrower you can periodically use to intercept the aliens (similar to the pepper in Burgertime) and a Freeway/Frogger style bonus round between mazes. There is also noticeably less flicker present than Atari Pac-Man (or even Ms. and Jr. Pac-Man, for that matter). All in all, not a bad alternative for feeding those power pellet-chomping gaming urges. B

This is probably one of the more pointless reviews I’ll ever write, but if nothing else this entry will prove my dedication to this blog’s core project. Although Alpha Beam with Ernie is something of a collector’s item (Atari Age rates it as “scarce”), it’s not likely because of its play value. It is clearly made for toddlers, after all – toddlers from 1983, that is. Unless your financial straits are truly dire, it’s hard to imagine setting your young ‘un up with a Stella emulator to play this game rather than any of the countless modern games designed for their generation. Having said that, Alpha Beam with Ernie isn’t bad for what it is. I had to channel my ancient memories of playing educational games on my elementary school’s handful of Apple IIe’s in order to rate this objectively. The visuals are bright and colourful (although the titular Sesame Street Muppet himself does not appear in the game itself AFAIK) and I imagine the gameplay to be pretty intuitive for the targeted age bracket. Now that I think about it, maybe you SHOULD fire up the emulator and let the kids get their first taste of Atari. Be warned, though – because the original game was operated with special kid-friendly controllers, you will have to do some experimenting on the keyboard to make it work on emu. Not sure what to rate this, so I’ll take the easy way out and give it a C.

(Update September 25, 2016: Embarrassing confession time: I recently watched a video on YouTube that proves that Ernie does, indeed, appear at the end of an objective. Honestly, I just didn’t play it that long.)

Parker Bros had some astounding luck when it came to securing third-party developer rights for some primo arcade titles of the day. Their roster included Frogger, Q*Bert, Popeye and a handful of licensed Star Wars titles. For the most part they did a pretty good job. And then there’s Amidar, which to the best of my knowledge was never a huge quarter-swallower in its arcade incarnation and is not hugely compelling on the home console front either. It’s not a bad game; it’s similar to other fill-in-the-coloured-box games like Pepper II and Qix although not as good as either. It just seems to move a little slow and the difficulty level ramps up too slowly. However, as neither Pepper II nor Qix were ever released for the 2600, Amidar fills a gameplay void in the console’s library. C+