Considering we live in a world where people design and use emulators for obsolete operating systems (more pointedly and painfully, also a world where middle-age men write blogs about decades-old video game consoles), I would conjecture there’s possibly more demand for Basic Programming today than in 1979. Tech-nostalgia definitely holds a strong appeal in nerddom, but Basic Programming just seems like a recipe for frustration. Originally packaged with two special keyboard controllers that you clip together, I can only speak for the emulator experience, which is roughly the equivalent of cutting your toenails while doing a handstand. I intuitively wanted to plug the familiar BASIC commands in via the actual letters on my keyboard rather than the controller emulating keys. Basic Programming is so dependent on its original controls that it’s virtually impossible to offer an honest review via emulation. I can tell you this much: as badass as the box art might look, in terms of depth Basic Programming offers at best a much less user-friendly  equivalent of the first chapter in an about.com BASIC tutorial. If you want to program your own 2600 game, download a Batari Visual BASIC compiler and let Atari Age point you in the right direction. I may revisit this review in the future if I ever get my hands on a Basic Programming cart with the controllers (sorry, but obtaining an Indy 500 cart with driving paddles is gonna take precedence). Until then I’ll give it a C – my default grade for any game in which I’m lacking pertinent hardware or information. 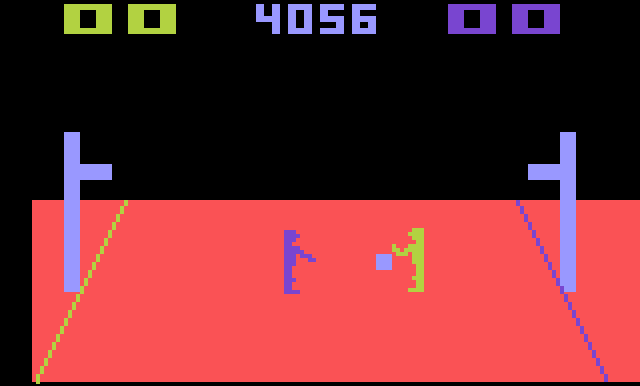 Boo-yeah! I LOVE this game! Everyone knows that the first round of Atari sports cartridges were a pretty sorry lot, but Basketball (known best in popular culture for its cameo in Airplane!) succeeds in spite of itself. It’s no truer to the rules of the game than Football or Home Run were (no concerns about travelling or fouls here), but it’s just so darn fun, especially if you find a buddy to play with. However, even the computer offers a decent opponent. The physics are something else (there are times you can actually catch the ball you just threw), which just adds to the charm. This may be one case in which Atari actually bettered its more streamlined Intellivision sports equivalent. I have never played Intellivision’s NBA Basketball, but I hear it’s pretty bad. B-

I remember my first “educational” video game. I was in the Third Grade and my elementary school had just bought several Apple II+ computers. Time on one of the computers was offered as a reward, and a popular game for many of the kids was a simple addition, subtraction, multiplication and division game. The difference between that game and Atari’s Basic Math is that it added a crucial visual component (a piece of a robot would be added with each correct answer) to make it a video game as well. Basic Math offers no such perks. It really is just basic math problems, so I guess you can’t fault them for truth in advertising. I can only imagine some kid getting an Atari VCS on Christmas Day 1977 only to discover that Basic Math was the only cart his parents bought. Oh well – at least he still had Combat. F 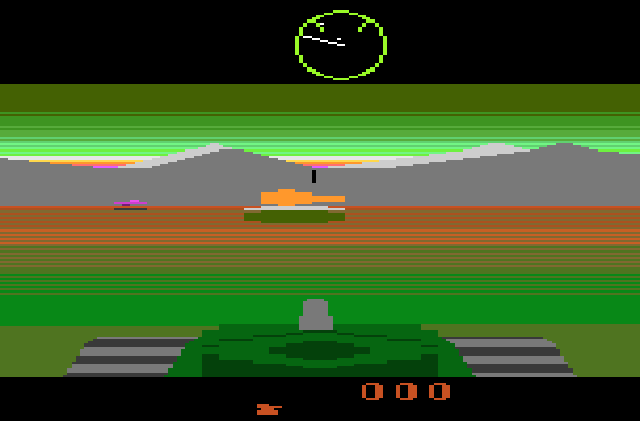 Atari gets a lot of stick for its misfires, but in reality the company had an impressive amount of quality control when it came to its arcade ports. Mind you, when they failed they failed big (Pac-Man and to a lesser extent Defender), but as I mull over Atari’s dozens of ports for the 2600 I can identify very few titles that did not at least capture the basic spirit of their coin-op predecessors. Just off the top of my head I can identify Berzerk, Dig Dug and Missile Command as carts I have gotten endless enjoyment from over the decades. Atari was particularly energized when they were translating their own arcade titles to their humble-and-growing-humbler console. That’s why Battlezone retains what made the original so great while being realistic about the VCS’ limitations. A rasterization of the arcade machine’s vector graphics could have worked, but I’m glad they opted instead for the glorious colour graphics of this stellar conversion. More importantly, Battlezone retains all of the fast, strategic gameplay (minus the pyramids, which I never found very useful anyway) of the original. Some claim Activision’s excellent Robot Tank is the better Battlezone-style game, but my longer history with the Atari cart makes it my favourite of the two. A 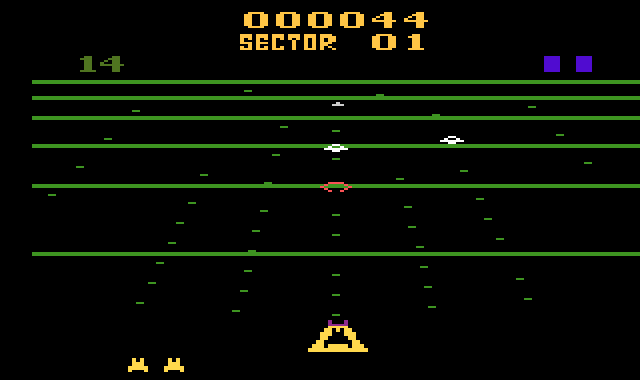 Even though it lacks the 360-degree movement, Beamrider is probably the closest we have to a version of Tempest on the VCS. It’s a slide-and-shoot game that takes place on a grid; enemies can hop all over the place but you can only fire in position on the grid’s vertical lines (not sure why Activision intersected the lines, making the grid look less smooth). Each wave ends with a mother ship that you have to shoot with a special, limited weapon. Beamrider is a very good game but very tough; the difference between the “A” and “B” difficulties is not negligible. It’s an unusual game for an Activision title of its time in that it was originally designed for the Intellivision and subsequently ported to the 2600, the 5200, Colecovision and a number of contemporary computers. In some ways it marks a sad turning point in the history of Activision’s relationship with the VCS, as the console would no longer be the company’s primary focus. Unfortunately, it kind of shows – the graphics just seem blocky and underwhelming by Activision’s high standards. It looks more like the kind of visuals 20th Century Fox would settle for, not the company that brought us River Raid and Pitfall II. Still, a quality title. B