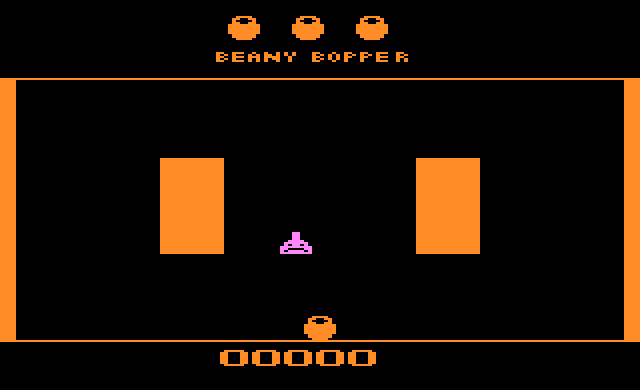 I believe it’s a sign of intellectual laziness to equate the creative mind with the use of recreational pharmaceuticals. Having said that, I’m pretty sure whoever programmed Beany Bopper was on some kind of recreational pharmaceutical. Your mission, should you and your onscreen avatar that looks like an eyeball choose to accept it, is to shoot and capture little red “beanies” before they kill you. In the process, you rack up points by catching falling parachutists, non-parachuting jumping men, syringes (that’s what they looked like to me, anyway) and other objects. Beany Bopper is a hidden gem in my opinion – it features fast, frenetic and fun gameplay. Flaws include rudimentary graphics even by (and this should go without saying, and will from this point forward) 2600 standards and too few game variations. That’s not always a bad thing – a lot of stellar later titles hardly used the “Game Select” switch at all. However, considering that Beany Bopper wasn’t exactly pushing the limits of the hardware, I think Fox could have offered a little bit more, especially considering – like most games at the time – it probably retailed for a pretty penny. B 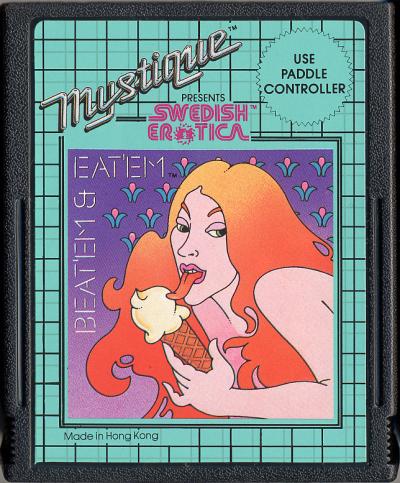 Why do these “adult” games by Mystique have to be so high up in the alphabetical order? Come on, basic symbols of communication, I’m trying to make an impression here! I am not including the screenshot because some things, once seen, can never be unseen. I’ll leave that particular heavy lifting to the Atari Age link below. If you want to know more about Beat ‘Em and Eat ‘Em and other adult video games (including many of Mystique’s), check out this hilarious article by famed video game, sports and cultural satirist Seanbaby. F 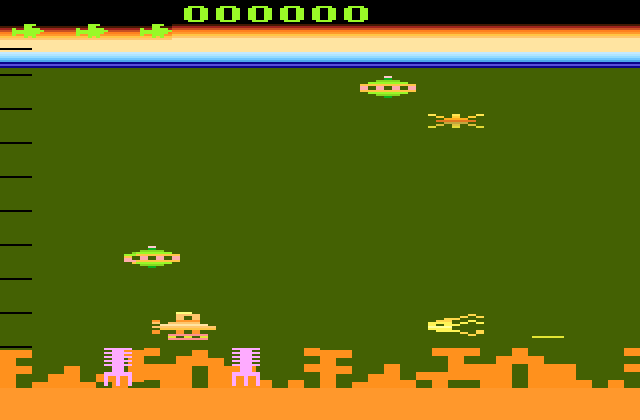 Unexciting, endlessly repetitive Defender/Seaquest type game representing some of the very worst of Atari 2600 shovelware. I had some hopes for this game. I recently competed in an Atari Age High Score Club challenge for Crash Dive, a similar underwater scrolling shooter in which you collect treasure from the bottom of the ocean. I disliked the game at first, but as I persevered it revealed some unexpected strategy that added to my enjoyment. Bermuda Triangle revealed no such depth. Instead, it just seems endless and random. It leans on a big pet peeve of mine by drawing out your sub’s explosions by an unnecessary couple of seconds before letting you get back to the game. Once you hit 10,000 points (you’ll probably shut it down out of boredom by then) laser beams start coming out of nowhere and they’re virtually unavoidable. I haven’t been overly impressed by what I’ve seen from Data Age so far – the company took obvious pride in their graphics (Bermuda Triangle, while blocky, is colourful and striking) but the gameplay in this and Airlock is extremely deficient. F

(March 6, 2019: I’ve been revisiting some of my “F” grades and I think Bermuda Triangle is due for a reassessment. It’s not a great game but I don’t think it deserves an F. If anything, the problem lies with a manual that doesn’t explain the game very well.) One running theme you’ll find in my reviews of the best Atari arcade ports is that, most of the time, the relatively minor differences between the versions really do not affect enjoyment of the game. For instance, 2600 Berzerk lacks the computerized warnings and enemy diagonal shooting of the 1980 Stern original. Does that make it any less awesome? Hell no! If anything, the sparse sound (just about everything sounds like a sharp or prolonged electrical shock) makes the game sound ever so slightly creepy and mechanical. With Evil Otto always just around the corner in the harder variations, it adds to the tension. Lack of diagonal shooting on the robots’ part does not necessarily make the game easier, but it does add another element of strategy. Lots of good game variations; you can play with or without Evil Otto and can also adjust for robot lethality and extra life benchmarks. A masterpiece. A+ 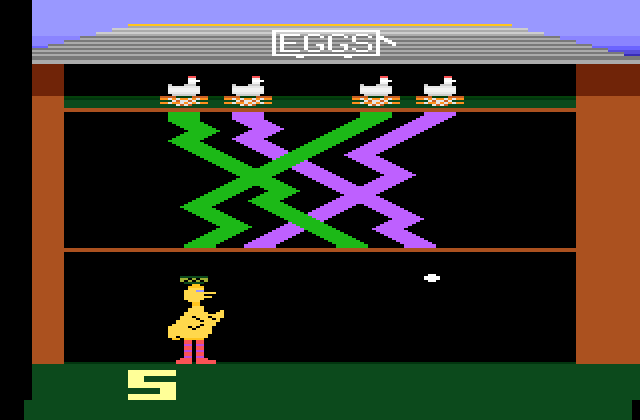 (Posted June 13, 2018) Remove the first few, obviously pre-schooler variations and the Sesame Street theme and then ramp up the difficulty just a smidge and Big Bird’s Egg Catch could have been an arcade-style twitch game for all ages, and a quite good one at that. As it is, it’s a delightful educational game for tykes with some added appeal for the rest of the family as well.

Big Bird’s Egg Catch starts out very, very easy. The whole point of the first few variations is to get kids adjusted to the Kid’s Controller and the very concept of left versus right itself. While hens in the upper third of the screen lay eggs that plummet into chutes towards Big Bird, kids only have to push left or right to automatically place the Muppet under the correct chute. A couple of variations later, however, Big Bird actually moves and the player must line him up with the right chute manually.

And then all kinds of madness breaks loose. Poor Big Bird is subjected to criss-crossing chutes, temporarily invisible chutes and even invisible eggs (you have to watch for the hen laying the egg) as the action gets faster and faster. I still wouldn’t call the game particularly hard even at its most difficult, but it’s certainly challenging for a game aimed at preschoolers.

As with most of these Atari/Sesame Street team-ups, the graphics and audio are simply astounding. I wish Atari would have put a fraction of the charm on display here into some of its grown-up games (I’m looking at you, Pac-Man). The manual is a winner too, featuring its own Little Golden Book-style Big Bird story. I never know quite how to rate these Sesame Street games because as educational games they’re all astounding, but your mileage may vary as to how much fun an adult would have playing them. However, Big Bird’s Egg Catch features solid enough gameplay to warrant a B-. 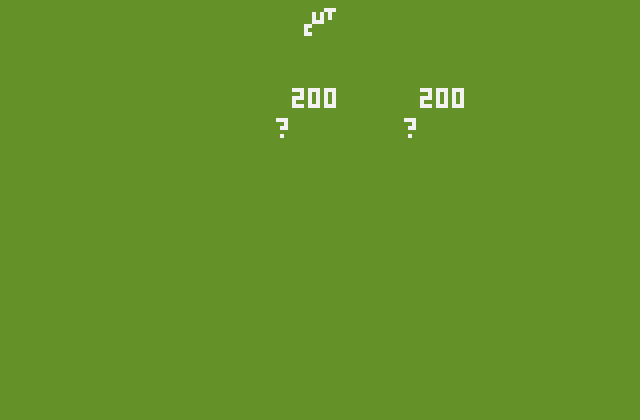 Well, it’s blackjack. Not much more to say, really. It plays as competently as any spruced-up modern computer blackjack game, with the important distinction that you can’t play for real money unless you choose to do so in the privacy of your home with some friends. You start out with 200 chips and can bet up to 25 chips on each game (no idea if that’s standard or not). Although it seems like a strange decision on the programmer’s part, the paddle controllers really add to the enjoyment of the game – not sure why. It may just be the speed at which you can select “hit,” “double,” or “stay.” The cards are colourful and well-rendered. Blackjack is the kind of game Atari programmers excelled at until they figured out ways to push the system further than it was ever meant to go. C+