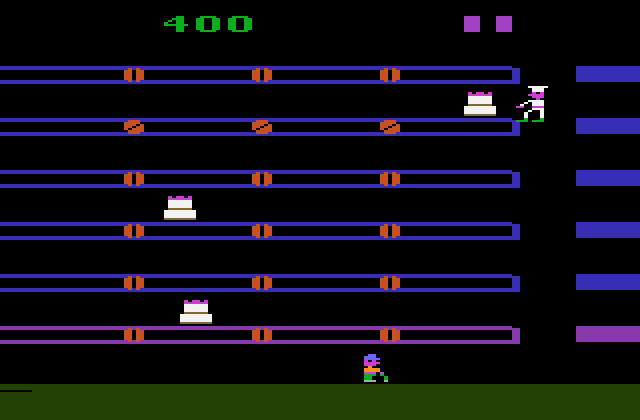 I did not have high expectations for Cakewalk because it contains a number of hallmarks of a poor third-party Atari game. Obscure label? Check. Extremely rare? Check. Unnecessary, blocky splash screen a la Data Age? Check. All this plus released in the video game glut of 1983? Check. However, Cakewalk defied my prejudices. It’s a game similar to Tapper in which you have to catch cakes and gingerbread men from six conveyor belts without letting them drop. You are able to stop one conveyor belt at a time in order to catch up with the orders, but a better option lies in the variations that allow you to speed up the conveyors. As with a lot of Atari games, the action starts out easy but gradually scales in difficulty to the point where you’re frenetically going up and down catching cakes and dodging knives. If you like games like Tapper or Pressure Cooker, you’ll love this game. B+

For current listings of Cakewalk for sale on eBay, click here 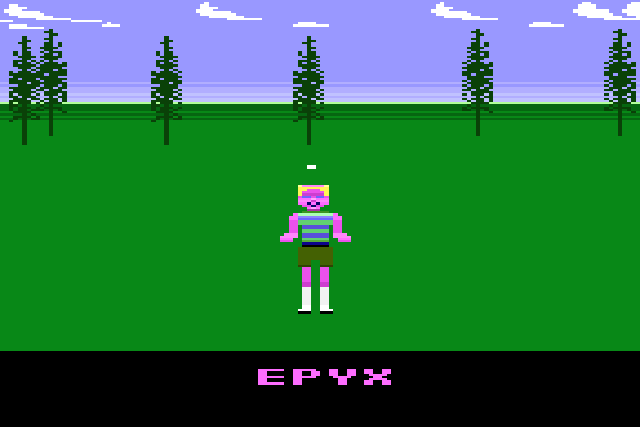 At the risk of going off on a rant here, there is something about the culture of the late ‘80s I’ve always found somewhat off-putting. It was the beginning of the “extreme” culture that lasted well into the ‘90s. Much of that included, in addition to extreme soft drinks and extreme potato chips, “extreme sports.” Don’t get me wrong; I have nothing against extreme sports – it’s just a certain obnoxious attitude that goes along with it that annoys me. In comparison to, say, the later Tony Hawk series of games, the events on display in California Games (BMX, half-pipe, surfing and – believe it or not – hacky sack) are not very extreme, but the attitude the rest of us cowardly non-extremists would have to deal with for the following decade-plus is all there in the manual and marketing.

OK, rant over. Biases aside, California Games is actually a fine game that is a worthy installment of a franchise that thrived on more powerful systems of the day. The hacky sack event is surprisingly enjoyable even though it wears out its welcome quickly. The half-pipe skateboard section is fun, although I prefer the similar mechanics in BMX Airmaster. Speaking of BMX, the motocross event is probably my favourite, with lots of ramps and obstacles which present a not-insignificant challenge. The surfing event is also quite a test – one I haven’t even come close to mastering as of this writing. Graphically, California Games is bright and colourful and the action is surprisingly fluid. By this point in the console’s life cycle you could generally expect most (although definitely not all) 2600 games to look at least as good as a typical Intellivision title from the early ‘80s. That may have been cold comfort to those stuck with the VCS in the age of the NES and the Sega Master System, but in retrospect it’s actually quite impressive. B

For current listings of California Games for sale on eBay, click here

Canyon Bomber is one of those quirky early Atari games that I have a soft spot for but cannot in good conscience recommend. The premise is as simple as it gets: kind of like an upside-down Breakout, you compete against the computer or a friend to blow as many blocks out of a canyon as possible. You cannot control the plane itself, just your shot (would you call that the 1978 version of a rail shooter?). The “A” difficulty is supposed to handicap your shot so you can only fire again once it lands, but in reality that seems to be the case in the “B” position as well. Unlike most of the game, you can actually use the paddle knob to target underwater submarines on the Sea Battle variation, which could have been enjoyable if the collision detection wasn’t so suspect. Canyon Bomber can be fun in very small doses, but overall it’s just a little too primitive. D+

For current listings of Canyon Bomber for sale on eBay, click here

Too many people – in the past and today – have thought it unnecessary to read the instructions for supposedly oh-so-simple Atari games. That’s a mistake. I have tried to get some enjoyment out of Carnival in the past to no avail. That is, until I finally read the manual and realized I was missing entire objectives from the game. For example, I didn’t even know you were supposed to shoot the pipes at the top of the screen. Carnival is a simulation of an old-fashioned shooting gallery, with the added challenge of ducks actually flying towards you to steal your bullets. The conservation of (and attempts to get more) bullets is probably the biggest element of strategy in this game, differentiating Carnival from the majority of slidey-shooters from the era. Fans of the arcade game (which I have not yet played, although I have little excuse with the existence of MAME) tend to dislike this version, mainly due to the relative ease of play. Even without the coin-op for comparison, I can attest that it isn’t the most challenging game around, but the difficulty does escalate after a while. Overall, Carnival is not bad but not great – the very definition of a C.

For current listings of Carnival for sale on eBay, click here 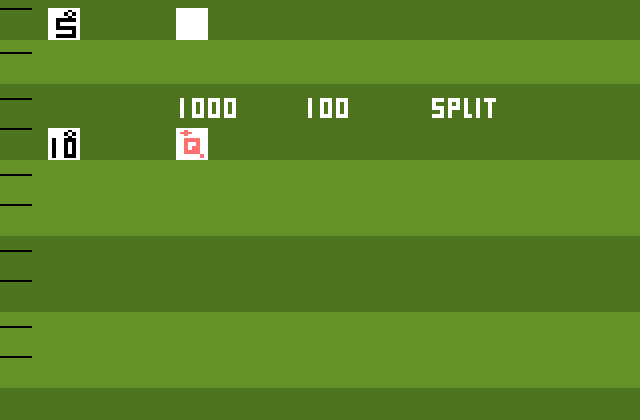 Seems like Atari was kind of reaching for ideas around this time. They had just released Blackjack in 1977; in the following year they release Casino which also includes blackjack in addition to stud poker and poker solitaire. The blackjack game is just as good here as it was on its eponymous cart, while the poker games are also quite entertaining (although I swear the computer gives itself the better hands more often than pure chance can explain). So if you’re one of those rare people who really, really wants a gambling game for the Atari 2600 but can only afford one, I guess this is the one to go for due to the extra games. C+

For current listings of Casino for sale on eBay, click here

One thought on “Atari 2600 Game Reviews: Cakewalk through Casino”