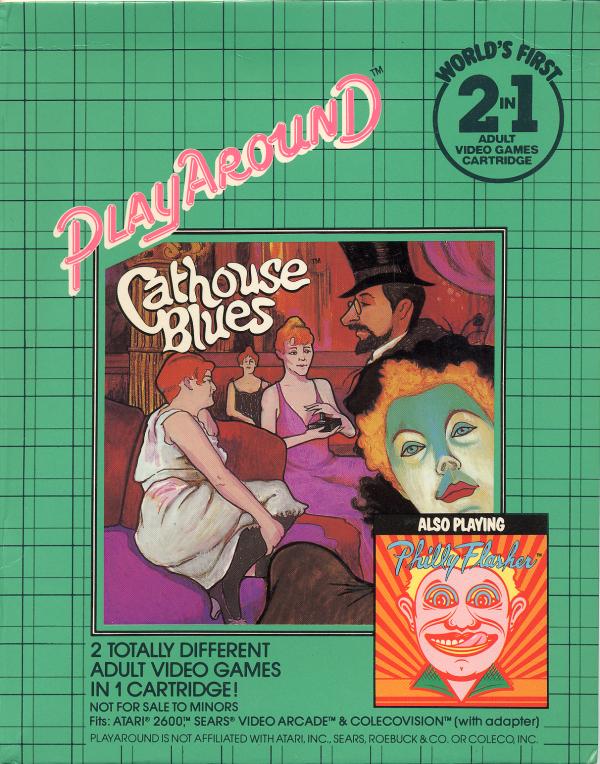 Oh will my suffering with the epidemic that was Playaround/Mystique’s lineup of “adult” Atari 2600 titles never end? And I haven’t even got to the worst of them yet (that abomination of all abominations: Custer’s Revenge). If any of these games were actually fun I could overlook the frankly silly concept of erotic Atari games, but they’re all terrible and would be terrible even without the sexual overtones. Cathouse Blues seems like an X-rated version of Blueprint, except it doesn’t really play that way. I couldn’t find an instruction manual online and quite frankly didn’t want to dig that deep into it. Sorry. F

For current listings of Cathouse Blues for sale on eBay, click here

Cat Trax was a long-lost prototype until (I believe) Atari Age turned it into a commercially-available cart in 2003. Was it worth the wait? Well, yes and no. If you’re passionate about Pac-Man-style maze games, this is certainly a decent one. The dogs are smarter and more relentless than the monsters in Pac-Man (not just the 2600 version – any incarnation of Pac-Man), creating an elevated level of challenge from your typical maze chase. Personally, I can’t seem to get too worked up about it. Maybe I’ve just had my fill of Pac-Man clones over the decades (let’s face it – people were getting sick of Pac-Man clones even by 1983). Bottom line is that 1983 video game consumers didn’t miss much, but passionate 2600 fans probably appreciated it more than warranted once it was released 20 years later. C-

For current listings of Cat Trax for sale on eBay, click here 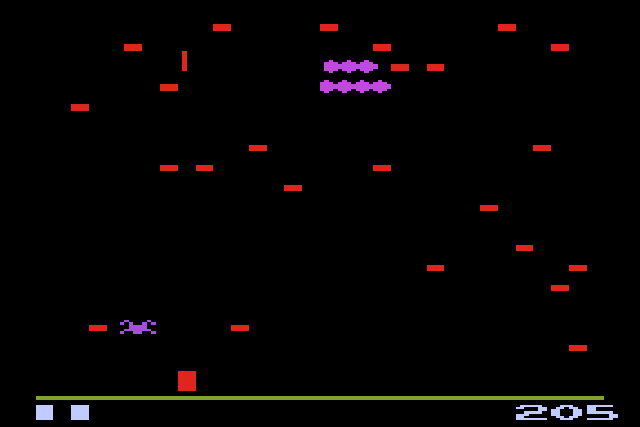 Hey, you know what game is awesome? Freakin’ Centipede is awesome. I don’t care how old or young you are, I cannot imagine anyone unable to derive at least some enjoyment from this game. Based on possibly Atari’s finest moment as a coin-op manufacturer, 2600 Centipede captures all of the gameplay of the arcade original. You know you have a fine port when the graphics are so blocky and basic but no one seems to care. Centipede already handles nice and smoothly with a joystick but the even better news is Atari released a trakball peripheral, bringing players even closer to the arcade experience. Forget the graphics – Centipede for the Atari 2600 is virtually faultless. And after reviewing a string of largely mediocre releases, it made me remember why I love this console so much. A+

For current listings of Centipede for sale on eBay, click here 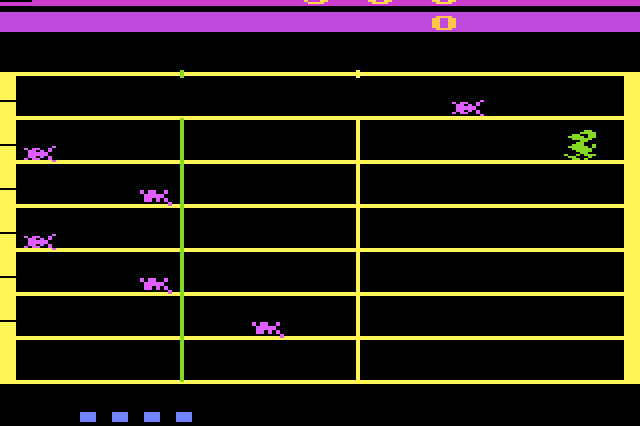 Let’s just say the title is an understatement. Most classic video games (actually, most video games period) start out relatively easy and let you get used to the gameplay, scaling gradually in difficulty. Challenge just goes for the gusto right off the hop. According to the very brief instructions, you’re a duck (I keep on seeing Snoopy from Peanuts, myself) working your way through a maze while avoiding a series of rats that dart rapidly from left to right. You can pass through the horizontal, but not the vertical, walls. The gameplay reminds me a little of Activision’s Freeway, which was no slouch in the difficulty department itself but was at least playable. The absurd difficulty of Challenge detracts from what could have been a refreshing take on the maze genre. Extra points, in an ironic fashion, for the cover art which has absolutely no connection to the gameplay. C-

For current listings of Challenge for sale on eBay, click here

From the instruction manual: “Do not attempt Nexar if you have high blood pressure or dislike video games.” Don’t flatter yourself, Spectravision – all this poor-man’s Tempest did was give me a mild headache and annoyance over reviewing another prime example of pre-crash bloat. Simulated 3D first-person shooters like Challenge of Nexar were rarely successful on the 2600 but were attempted surprisingly often. More often than not, it resulted in lousy scaling (if you can technically even call it that) and suspicious collision detection like we see here. Nexar also features a pet peeve of mine in abundance: the whole screen flashing when you hit something. Not only does it distract the player for precious milliseconds, but the first few times it happens you’re unsure whether it was you or an enemy that took the hit. With the 2600’s limited graphics, it’s crucial to make outcomes clear and easy to follow. In spite of its dead simple concept and shallow gameplay, Challenge of Nexar fails even at that. D

More Info: Challenge of Nexar on the Atari Age database.

For current listings of Challenge of Nexar for sale on eBay, click here