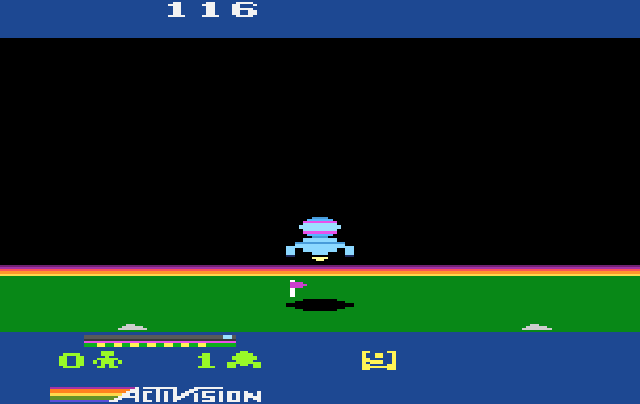 I’m not sure I’ve ever had such mixed feelings about a game. There is so much wrong with Cosmic Commuter. The biggest problem is too many ingredients that just don’t fit. It starts out as a shuttle landing game (what was with all the Lunar Lander games back then? I guess the moon landing was still fresh in peoples’ memories). I’ve never been good at those at the best of times, but this one was even harder than usual so I easily lost two-thirds of my lives in this section. Once you land successfully, it becomes a Choplifter-style side-scroller in which you attempt to pick up cosmic cab customers. The problem is the map is huge, customers give up on you too easily and your ship burns through fuel like crazy. What’s worse is that once you pick up your final customer you no longer have access to fuel pods, so if you’re still a long way from your destination you’re screwed. The game is a mess and seems impossible, yet for some strange reason I still enjoyed it. The usual high quality Activision graphics help, but I also enjoyed the gameplay. This game could have been great if Activision would have just dropped even one of the game’s barriers to success. There’s a fine line between making a game extremely hard (Chopper Command, for instance) and impossible. C-

(Addendum July 7, 2017: I’ve been playing a lot of Cosmic Commuter lately because it’s an AtariAge 2600 High Score Club game right now, and it’s far from impossible. You can avoid the fuel cell problem by picking up your fares in an orderly left-to-right or right-to-left fashion. I would still say it’s not terribly intuitive, but it’s a decent little game.) 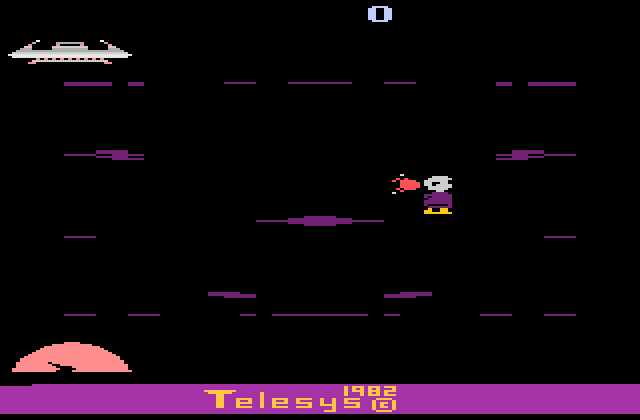 Cosmic Creeps isn’t bad but it’s no hidden gem. The game includes two screens with two completely different modes of gameplay. The first is a Frogger-style deal where you guide your man to the spaceship at the top of the screen while avoiding moving walls and other obstacles. It’s pretty easy. The second screen has you using the ship to fire down at the cosmic creeps pursuing the kids you’re trying to rescue. Problem is that it’s extremely easy to hit the kids, especially when the creeps trail them closely. Not sure how much more there is to say about Cosmic Creeps. Despite its two modes of gameplay it feels awfully shallow and gets boring quite quickly. D+

Cosmic Swarm could very well be the worst Atari 2600 game I’ve played yet. I have no idea what CommaVid was thinking when they released this shameful piece of rubbish. The game could have been salvageable if not for the most ridiculous control scheme I’ve ever encountered on the system. It seems like they were going for Asteroids/Space War rotate-and-thrust control. But no – that would have been too intuitive. Instead, your ship (which is a dead ringer for the Asteroids ship, by the way) moves horizontally and vertically when the red button is up and only rotates when the red button is depressed. If that wasn’t bad enough, part of your objective is to shoot the bottom of the squares (why the bottom?) the aliens are carrying around in order to deactivate them. The problem is that when you try to line up your shot to shoot up, your ship starts rotating when you press the button, throwing off your shot. And then there’s the ridiculously short firing range – you practically have to get right next to your target in order to have any chance of hitting it at all. Everyone involved with the production of this game should feel bad about themselves. I don’t care if it’s been over three decades later. F

Crackpots is a real hoot. Even though the game contains the expected quality of most Activision games of the time, it’s not one you hear about very often in Atari fan circles. Crackpots is kind of like Kaboom! in reverse; instead of catching bombs, you’re throwing flower pots down on spiders crawling up a building. If six spiders crawl into the upper windows a “creepy crawler” eats a section of the building, making hitting the spiders even more difficult even as the arachnids get faster. Each group of spiders (represented by different colours) have different climbing patterns that you need to take note of in order to succeed at Crackpots. The game looks great and the spiders are brilliantly animated. My only complaint was Activision’s choice to make it a joystick rather than paddle game. The game requires pinpoint accuracy that the joystick cannot always deliver. This may have been a pragmatic choice, however; somewhere around this time Atari had stopped packaging paddle controllers with the Atari 2600 (my own first 2600, purchased in 1984 – yes, 1984 – for $100 only included two joysticks and no pack-in Combat). B+ 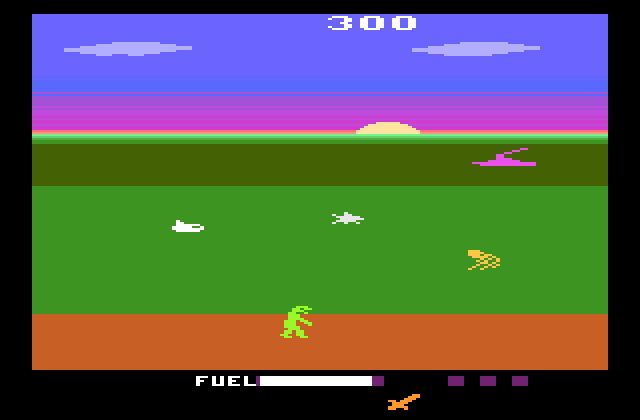 Let there be no doubt: Crash Dive is derivative. Much of the enemy behaviour and graphics are stolen right out of contemporary Activision games like Chopper Command and Seaquest. Even though it seems like Fox is just throwing random elements of other games together to see if they stick, the darn thing actually winds up being somewhat enjoyable. Crash Dive is a side-scrolling shooter in which you operate a flying submarine (!) on a search for sunken treasure, in the meantime fighting airborne enemies such as seagulls, helicopters and fighter jets as well as underwater foes such as enemy subs, manatees, killer fish and … Godzilla? Yeah, it’s quite the game. What saves Crash Dive from being a CommaVid- or Telesys-style waste of time is its real sense of strategy around the best order to shoot down your enemies (top to bottom, I find) and how to manage your limited fuel supplies. One big grade deductor is the programming decision to make the visual and sound effects for losing a ship the same as those for submerging underwater. When I first started playing I frequently mistook submersion for having lost a life. Once you get your head around that, it’s an enjoyable play. C