An exclusive for Atari Club members back in the day, Crazy Climber is a super-duper rarity. But unlike so many special promotions or limited edition Atari 2600 games, the game is actually fun. It can get tedious due to its primary game mechanic (you climb a building in an up-down motion, which can sometimes feel like work) but avoiding the closing windows and falling objects can be pretty exciting. I can’t verify this completely, but the game seems to give you a break by scaling back the difficulty after you fall a few stories. Good game if you can find it. If not, check out Parker Brothers’ Spider-Man game for the 2600, a similar game that may be even better because it gives you a few more things to do. B-

There have been some incredible homebrews released for the 2600 in its post-commercial era (check out Juno First, which I have not played but looks like a lot of fun). Right now I’m on the fence about this one. What I like about Crazy Valet is that it captures the feeling of Atari’s own early cartridges (particularly from the ‘70s era): an overly-elaborate backstory in the manual, a game concept that doesn’t connect to the game graphically (you’re supposed to be moving cars around a parking lot but you’re really just moving white blocks around in order to get one particular block to the right hand side of the screen) and a dependence on simple sounds and stationary rather than animated graphics. In short, it’s a puzzle game. Nothing wrong with that; I found parts of it quite enjoyable and it’s obvious that this was a labour of love for programmer Brian Prescott. However, I wish he had sacrificed some of the HUGE number of puzzle screens to add some graphical flourishes. For example, the “car” you’re supposed to move is not indicated as such – the only way you would ever know is from reading the manual. It’s worth giving a try, though, especially if you like puzzle games. C 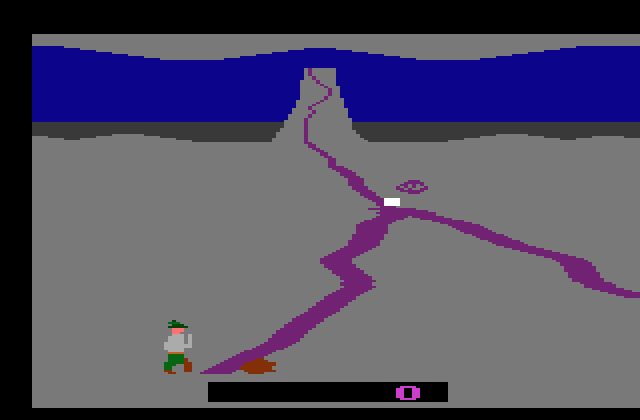 What do you get when you make a light gun game for a system that doesn’t have a light gun? You get Crossbow, Atari’s late-era port of the 1983 Exidy coin-op. There’s some kind of convoluted backstory that I’ve already forgotten, but essentially your goal is to protect your onscreen friends as they traverse a variety of landscapes by shooting everything from scorpions to bats to falling icicles and lava and more. This is a game you’re going to want to play on an actual Atari 2600 with an actual joystick controller, which itself is not optimal. I got trounced by this game playing on emu, but I still really enjoyed it. The graphics are superb, the colour is nice and well-rendered and there are a lot of unique levels (although I’ve only made it through a few of them). Plus, it’s something of a novelty on the 2600 as there are only a handful of light gun style games for the system. If only someone had bothered to manufacture an actual light gun, but I imagine by 1988 there was little financial incentive to market new peripherals for the declining console. Who knows? Maybe in these days of obsessive fandom crossed with technical know-how something like that could happen. Dare to dream. B- 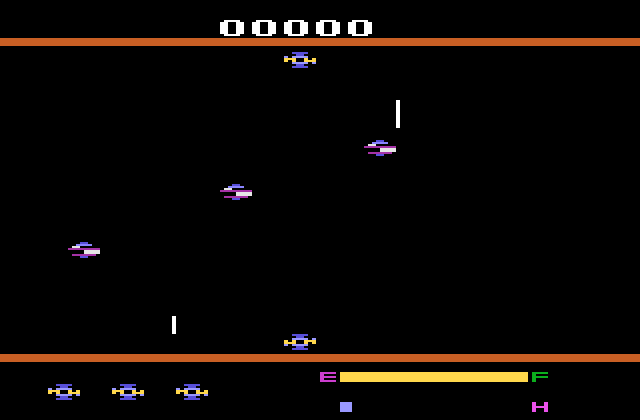 Now here’s a unique game for ya. Cross Force is a bidirectional slide-and-shooter with cannons on both the top and bottom of the screen with which you shoot at a host of evolving aliens. The cannons fire at the same time, catching your enemies in your – you guessed it – cross force. You can play with your cannons parallel to each other or diagonal, creating a criss-cross effect between them which adds a whole new dimension to the game. The aliens kind of remind me of those from Demon Attack in their sounds, the way they move and the way they split off to form different creatures. I really don’t have a lot of bad things to say about Cross Force – I must say it was a pleasant surprise considering Spectravision, from what I’ve seen so far, was at best a hit-and-miss third-party producer. B

You know what’s great about long-term fandom? The prerogative to call out companies on their cynical cash-grab ventures several decades after the fact. It works in reverse as well – a lot of companies made exceptional games but were never recognized for their efforts at the time. Froggo’s Cruise Missile is definitely more a case of the former scenario than the latter. A little background: Froggo was a third-party company that latched onto the Atari 2600 late in the game. They are particularly reviled among 2600 fans for a number of reasons, but mostly because their games were nigh-unto-unplayable with graphics that blatantly ripped off other, superior games. Both points are certainly true, but I don’t think they were any worse than pre-crash cash-in inferiors like Data Age. I think Froggo gets particular disdain because they had the gall to continue producing this kind of shovelware long after all the other crapufacturers had gone out of business. Anyhoo, Cruise Missile is pretty bad and it’s mainly down to poor control and collision detection. It’s a side-scrolling shooter in which you have to shoot down a certain number of towers on the top level in order to descend to the lower level and continue to shoot at targets for no discernible reason. That alone would be okay, but the controls make this simple non-objective extremely difficult. The main problem is you have to push the joystick in the direction you’re firing, causing your already fast ship to go even faster, causing it to fly into a tower more often than not. Your ship also often seems to explode for no particular reason. I’d be lying if I said I didn’t have some fun with Cruise Missile once I got a handle on the wonky controls, but hardly enough to recommend it. D