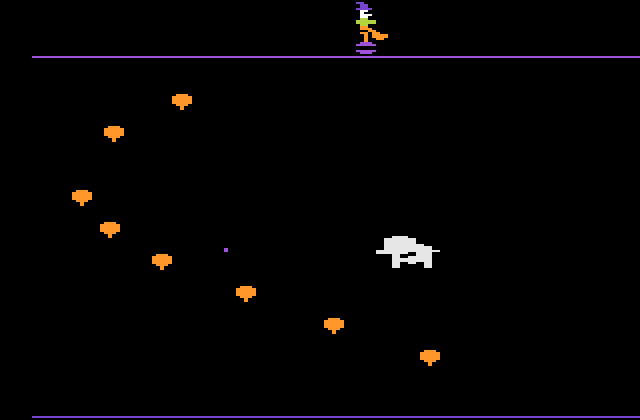 My experience with Atari’s unreleased prototypes so far has been largely positive. Most of them, in fact, could have been great games with a little fine tuning; I think most were simply casualties of the Big ‘8-3. Dumbo’s Flying Circus is another of these lost opportunities, combining gameplay elements of Joust and Defender to create a reasonably challenging game for all ages. You operate the elephant in a velocity-and-gravity-based Joust-style fashion as you attempt to capture as many balloons as possible. Most of the balloons are harmless but others can explode on impact so you need to shoot them with peanuts instead. Clowns will periodically float towards the top of the screen that you must shoot down and catch Defender-style. If you don’t catch the clown it will form a high wire at the top from which it drops things down on you. There does not seem to be a penalty for missing balloons, so even though the controls may be a little hard for the game’s intended audience (it was conceived as part of a series of children’s games), at least it allows them to get the hang of them before giving up in frustration. The game sports a very handsome title screen and is excellently rendered in general. My main quibble is the lack of a score counter in the game proper – you only find out your score once the game ends. Of course, this might have been something that would have been worked out had the game been programmed to completion. B- 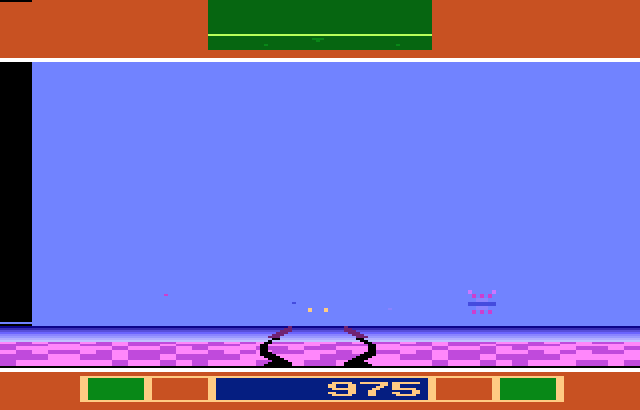 Yawn. First-person space shooters generally fare poorly on the 2600 unless there is a strong element of strategy a la Star Raiders or especially Starmaster, and that’s the main problem with Earth Dies Screaming. Despite the promising title, the game is just another bog-standard space FPS with little to no strategy or detectable upscaling of challenge. If anything, it’s little more than a visual upgrade (I’ll grant that the game is quite pretty) of Atari’s early, primitive Star Ship. Experienced gamers of all vintages will likely get bored quickly. D-

You may have noticed that I haven’t been very kind to any Kaboom! clones I’ve reviewed so far on this blog (mind you, most of those have been gross Mystique “adult” games but had they been at all fun I would have given credit where it’s due). This is not a commentary on the original, which is a great game even if it becomes more of an endurance test than something super-fun. It’s also one of those games, in my opinion, that if the programmer had done even one thing different it just wouldn’t have worked. For example, if you weren’t able to pick up bombs with your lower buckets, Kaboom! would have been virtually unplayable. That’s the main problem I have with Eggomania. Basically, Eggomania has a turkey-looking bird taking on the Mad Bomber role with eggs as its bombs and a bear that looks like Cookie Monster with a hat as your buckets. My issue with the game is that the eggs smash the second you let one past even the brim of the bear’s hat, meaning you can’t just smash him into the eggs Kaboom! style. There is a nice twist in that there are stages where you can shoot eggs back at the bird to send it to turkey heaven, but it’s not enough to rescue Eggomania from being a very lacklustre Kaboom! clone. D+

Elevator Action is the first prototype I’ve reviewed in the blog so far that is so incomplete that I cannot in good conscience give it a letter grade. Instead, I review it as a curio and for the pure interest in knowing there actually was a reasonable attempt to port this awesome arcade game to the VCS. For those not familiar with the game, it’s an early platformer in which you play a spy with a mission to retrieve documents from various floors in a skyscraper using an elevator to get from floor to floor. In the process you encounter enemy spies who will try to shoot you before you shoot them; you can duck or jump to avoid these shots. The original game and most fully-developed ports are quite a hoot, and there was some obvious potential here in Atari’s 2600 attempt. The graphics are what you’d expect from an Atari-produced game in 1983, while the gameplay is a reasonable facsimile of the original. However, there are some quirks. For one, the collision detection is suspect, to say the least. Another, albeit more fun quirk, is your ability to fly – if you keep the joystick in the up position you can actually keep your spy suspended in mid-air. Also, maybe I’m dim, but I cannot find the documents anywhere. Elevator Action is worth a look just to see what could have been. 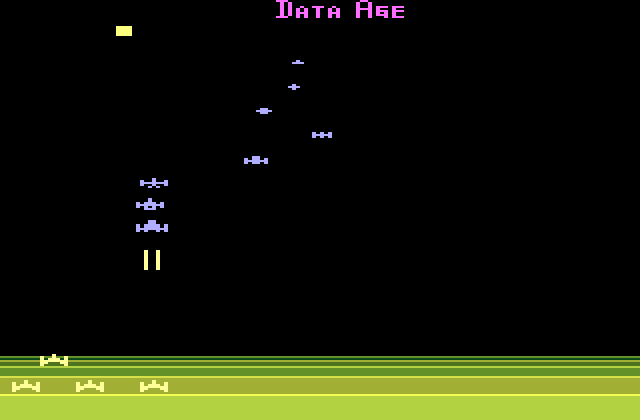 Hmm – not bad. I haven’t been too impressed with Data Age’s output so far but they really pulled out the stops with Encounter at L-5. At first glance it seems like a fairly standard Galaxian-style shooter with some primitive VCS scaling. The big difference is the firing scheme: using the paddle controller, you position a cursor at the top of the screen at which the ship on the bottom fires. This means you can shoot at almost anything on-screen in any position, taking out wave upon wave of enemy ships in the process. It kind of reminds me an upside-down version of Activision’s Laser Blast (an old favourite and one of my “turnover” games). The higher difficulties of this game are simply insane, especially since you don’t even get a split-second break once hit. The collision detection could be better (a common problem among the lower-tier third-party publishers for the VCS), but if you’re looking for a next-level slide-and-shooter, you could do worse than Encounter at L-5. C+