Frogs, chickens and freeways – oh my! Welcome to a particularly amphibian, fowl and insect intensive edition of Woodgrain Wonderland. 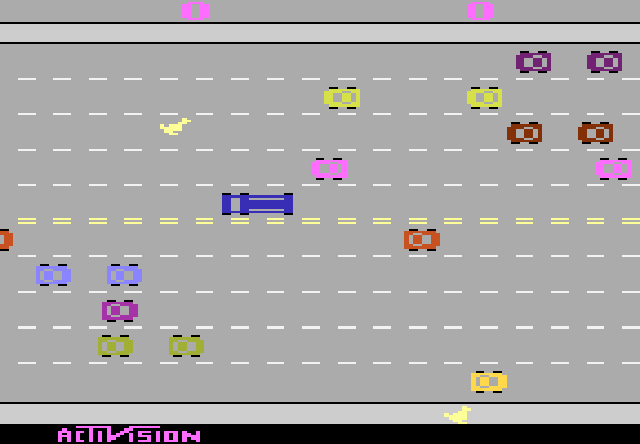 In Freeway you play a chicken who is – as is reportedly their inclination – attempting to cross the road. In this case the “road” is actually a busy ten-lane freeway. Technically a two-player game (although you can just as easily play by yourself), your goal is to get as many chickens across the road as possible in the time allotted. It would be easy to brand Freeway a Frogger ripoff if not for one important distinction: you can only travel up and down. Although some feel this limits Freeway’s gameplay, I think it’s one of the many features that gives it its challenge and charm.

The variations offer a wide range of difficulty, from very slow traffic to combinations of fast and slow vehicles all the way to traffic that speeds up and slows down (in these cases the vehicles sometimes seem to specifically speed up to hit you). Setting the difficulty switch to “b” causes your chicken to be knocked down two lanes when hit by a car (no deaths in this game) while the “a” position will knock it all the way to the bottom of the screen when struck. I strongly recommend sticking to the “b” setting until you’re really comfortable.

Programmed by the always-dependable David Crane (Pitfall!, Fishing Derby, Dragster), Freeway is an audiovisual delight. Setting the brightly-coloured vehicles against the grey highway makes the colours really pop, and the traffic sounds are surprisingly realistic. Analyzing the vehicle patterns to determine the fastest and safest way to cross the road is the true pleasure of this game. If I have one complaint, though, it’s that once you master those patterns the game doesn’t have much more to offer. However, Freeway offers plenty of challenge up to that point to keep you busy. B

The good news? It’s Frogger, with action that nicely replicates the fun, addictive action of the arcade version. The bad news? Not much of anything, really. It goes without saying that you will have to take your graphical expectations down a few notches, but otherwise this is a spot-on arcade-to-console translation.

I don’t know how young or how old you’d have to be to have escaped exposure to Frogger, but for those not in the know, the goal of the game is to get five frogs across a highway, a sidewalk and a river without getting squished by a car, eaten by alligators or snakes, or landing in the water. The 2600 Parker Brothers version of the game (there’s another one – more on that in a minute) features musical interludes before and after each level and a number of difficulty variations. The most significant one involves the game difficulty switch – set it to “b” and your frog can wrap around the screen if it’s on a log, turtle or alligator. Set it to “a” and he will go “splat” on the side of the screen. All in all, a fine port with which to unleash your inner George Costanza. A

Okay, now for a side note. Astute readers will have noticed that I have yet to review any of the games released for the Starpath expansion module, including the graphically-superior version of Frogger available for that cassette-based peripheral. The simple fact is I do not yet own it (the peripheral or the game). As I continue this blog my hope is that I will be able to increase my collection of Atari 2600 hardware, including the Starpath or at least the Stella Gets a New Brain CD which features all of the Starpath games.

Not quite sure what to make of this console-only sequel to Frogger. On the one hand, I like the newfound depth of gameplay, the superior sound and graphics, and the three unique screens with new challenges in each as you level up. On the other, I miss the simplicity of the original game. As alluded to before and as you probably guessed from the game title, Frogger II: Threedeep features three screens your froggie must traverse: one underwater, one on water and another in the sky. The underwater screen, which you start out on, is kind of like regular Frogger in reverse – instead of landing on things, you need to avoid various fish, submarines and eels, although you can catch a ride on a friendly turtle’s back. The second screen is most like old-school Frogger as you jump on logs, lily pads and the backs of baby ducks, turtles, hippos and whales. The latter three are often in a state of diving underwater, so caution is called for.

The sky level is easily the most frustrating. You have to master an upwards-jumping motion in order to get on the back of a bird halfway up the screen. It’s difficult but not impossible. One issue I had is how the game sends you back to the underwater level if you fail on one of the other two. The good news is that there are tricks you can use to quickly get back to your desired level. On the underwater level you can send your frog onto the log berth without hitting the hole, while landing on the mama bird on the surface screen will send you directly to the sky screen.

Frogger II: Threedeep is a very good game, almost like a combination of Frogger and Fathom. However, I’ll always prefer the simplicity of the original. B+ 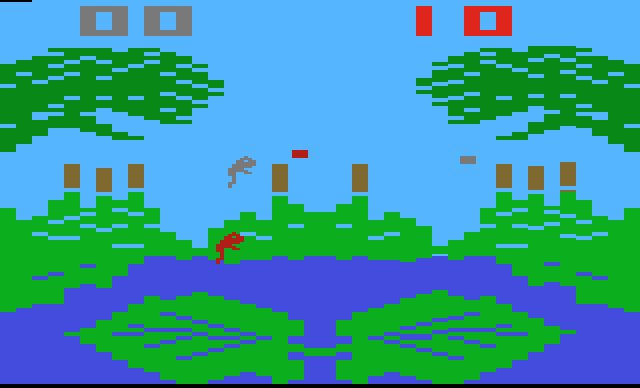 Frogs and Flies has always been my Exhibit “A” when highlighting what a great family-friendly console the Atari 2600 was. I have fond memories of playing this game head-to-head with my (much) younger sister, with the difficulty switches levelling the playing field. More on that in a bit.

Frogs and Flies is the Atari 2600 version of the Intellivision title Frog Bog. Mattel never had a lot of arcade licences like Atari or Coleco, but they often made up for it by developing their own frequently unique, innovative and quirky games. Frogs and Flies fulfils all three of those descriptions. The premise is dead simple: you’re a frog bouncing from lily pad to lily pad attempting to catch more flies than your human or computer opponent. The “b” game difficulty allows for simple long, high jumps and doesn’t allow your frog to fall in the water, while the “a” setting allows for more control over the frog’s movement but also puts you at risk of taking a dive in the drink, costing seconds of the three-minute game time. Usually I would set my difficulty to “a” and my sister’s to “b” which allowed her to get some easy points on the board, somewhat equalizing the game. It was basically my sister’s first exposure to video games and one that served her well through the years as she graduated to more advanced games (she’s a big Legend of Zelda fan today).

Nostalgia aside, I wasn’t sure if Frogs and Flies would still hold up. To my delight, I found it to still be a satisfying and challenging title. The graphics are colourful, with a transition from morning to night that serves as the game’s time indicator. The sounds are Atari 2600-realistic, with splashes that sound like splashes. The flies actually behave like real-life flies, with seemingly random movements which make catching them surprisingly challenging. Frogs and Flies may not offer a whole lot of gameplay depth, but it’s a nice diversion that especially shines in two-player mode. B-

Nothing to see here, so best move on. Frog Pond is similar to Frogs and Flies but without the challenge. It is either unfinished or a game made exclusively for children. Positives: the graphics are colourful and the insects are nicely animated. Too unfinished for a letter grade, but generally not recommended. 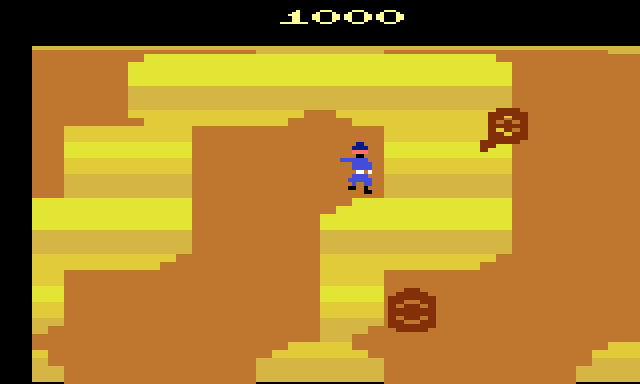 Front Line is based on a 1982 Taito vertically-scrolling shooter coin-op similar to Commando but arriving several years beforehand. I’ve never played the arcade version but this port by Coleco is a lot of fun. The shooting dynamic is similar to Berzerk — you have to shoot the enemies as quickly as possible or risk them getting a bead on you. The real fun starts when you get a chance to hop in a tank and fight some pretty fast-based battles against enemy tanks. The game features four difficulty variations but the basic shoot-first-ask-questions-later principle applies to all of them. My main quibble is the graphics – I’m generally pretty lenient when it comes to 2600 graphics until they actually interfere with gameplay. It took me some time, for example, to figure out that the random blue boxes turn into tanks when you touch them and press the fire button. I’m also not a fan of the various trees and hedges which slow you down, although they can be useful to hide behind. Overall a pretty good effort from a company that didn’t always put their all into their 2600 ports. B-