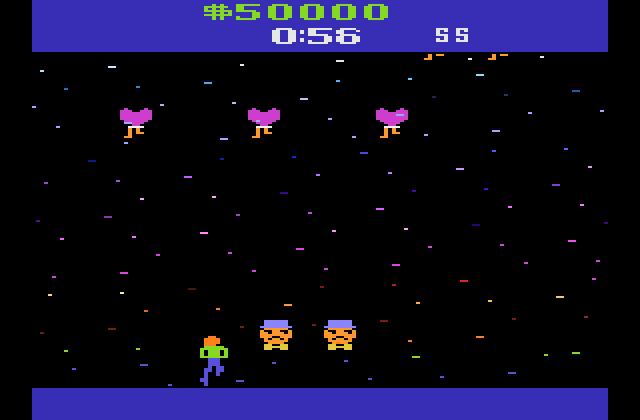 I never thought in a million years that I would ever enjoy Journey Escape. I’ve played it many times in the past only to give up in frustration. However, that was before I heeded my often-given but sometimes-ignored advice of reading the bloody manual. Before I knew it, I was greedily hitting the reset button for more.

There’s no doubt that Journey Escape is one of the strangest games ever released for the 2600. Your goal is to guide each of the five members of the rock band Journey to a spacecraft, at the same time avoiding ever-descending walls, promoters, groupies and paparazzi that sap you of money and/or momentum. To get the edge on all these succubae, you must run into loyal roadies (which look like blue aliens) who make you temporarily invincible and managers (who look exactly like the Kool-Aid Man) who help restore your funds and turn you invincible for the remainder of your run. If you get one band member into the escape pod before time runs out, it’s time for the next musician to run the gamut at a higher difficulty level.

One of the problems I initially had with the game was that I would play whole games without any of the helpful characters even appearing. Playing it a little more, it seems like the game rewards your ability to dodge the obstacles by presenting the helpful sprites more often. It takes patience, but it pays off.

Journey Escape is definitely one of the best sounding games available for the console, with a strong 8-bit rendition of the band’s “Don’t Stop Believing” as well as a tuneful ditty playing throughout the gameplay. The sprites are laughably abstract (the roadies are little more than hearts with legs on them) but they look really good. The flashing stars in the background are also a nice touch.

I have to give Journey themselves props for recognizing the cross-marketing potential between video games and their young audience at such an early date. Whatever their strengths as musicians and songwriters, innovation was never their strong suit – they played solid pop songs that rocked just hard enough to sound good blasting out of your local arcade’s speakers. But Journey Escape was prescient of the far-off Rock Band/Guitar Hero era when bands would routinely offer their names to games dedicated to their music.

Journey Escape definitely has its faults. The scoring system is a little messed up; you’re almost always going to lose more money than you gain and as a result there’s no solid metric to prove game success. The game is not well-liked among the classic gaming community, but I encourage its detractors to give it another go. You might be pleasantly surprised. B-

I’ve always found it interesting that even though 1983 was supposed to be a disastrous year for game sales, just about everyone had copies of red-and-silver label classics such as Joust, Dig Dug and Vanguard – all released that year. As such, there’s not much to report here as you probably already own this game. Basically, if you like Joust, the 2600 port does a fine job of emulating its gameplay. Joust is, of course, based on the classic fantasy fighting coin-op in which you play a bird-flying knight attempting to dismount your opponents, also mounted on flying birds. Once slain, you smash the resulting egg before it turns into an even more formidable nemesis. It’s a game of considerable finesse and there is something of a steep learning curve to learning how to fly your feathered friend (for their part, Atari included a “teddy bear” variant for this very reason). The gameplay differs from other ports in that the eggs actually float in mid-air, adding an extra dimension of challenge. Joust has never been a huge favourite of mine – I find the controls difficult on virtually every version I’ve played – but I like it well enough. B

More Info: Joust on AtariAge. For current listings of Joust for sale on eBay, click here

I don’t feel very qualified to offer an opinion of this homebrew. As I mentioned in my Joust review, I’ve never been a big fan of that game’s control scheme and I can only handle Pong in small amounts. Developer Kirk Israel’s fusion of the two feels, to me, like more of a novelty than an actual game. And the biggest drawback is in the concept itself. Instead of using a rotary device to control your paddle, you suspend your paddle in mid-air using the fire button, Joust-style. The problem is that Pong is a game of precision and Joust-style controls are certainly not precise. I suppose that’s the point – to add another layer of wacky challenge to an old and tired game. But does that necessarily make it more fun? I suppose it depends on your tolerance for both games, but for me the answer is no.

Israel adds extra complexity to an already difficult game by including the pterodactyl from Joust, which attempts to ruin your shot or knock your paddle down. This is a feature I could have done without, and I wish the developer had included a variant without it. A case could be made that the pterodactyl factor sends the ball on unconventional angles compared to regular Pong, but again, I don’t think that makes the game more fun. What it means is even less control of the ball and your chances of success or failure made even more random.

I did somewhat enjoy the Breakout variant in which you break through your opponent’s shield in order to score three points for a win. Overall, though, JoustPong did little for me. D. JoustPong can be purchased at the AtariAge store under the title FlapPing (the name was changed for copyright reasons).

More Info: JoustPong on AtariAge. For current listings of JoustPong for sale on eBay, click here

Don’t let the kiddie exterior fool you: Jr. Pac-Man will make a grown man cry. I actually wasn’t looking forward to this review, as the shellacking I took on this game in the AtariAge High Score Club is still fresh in my memory. Am I complaining about the quality of the game? Absolutely not! In fact, Jr. Pac-Man is right up there among the best games on the console and virtually without argument represents the ultimate Pac-Man challenge on the 2600. The graphics and sounds are system-perfect. You won’t have much time to admire them, though, as the action moves about ten times faster than Ms. Pac-Man and infinitely faster than whatever passed for action on the original Pac-Man cart. The vertically-scrolling screen is a learning curve, as are the various toys that turn regular dots into bricks and also destroy your power pellets. Jr. Pac-Man can be a frustrating experience, but it’s a must-have. I wish they would have released it when it was developed in 1984 – it may have saved the video game industry. A+ 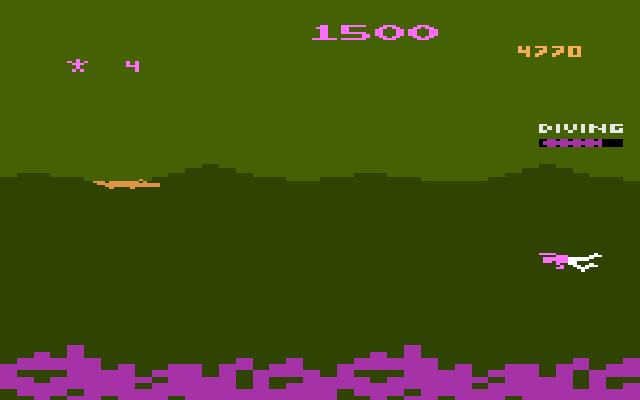 One thing I both love and hate about early video games is that you never entirely master them. For example, I once knew all the tricks and patterns key to mastering Jungle Hunt, but after over 30 years of on-and-off playing I find I need to relearn them all over again each time I pick the game back up. In many ways this is a good thing; a game can still remain fresh even after a long period of time. Jungle Hunt (an adaptation of the coin-op Jungle King) is unique among Atari 2600 titles in that it has four unique styles of gameplay: swinging from vines, swimming with crocodiles, dodging boulders and – um – pygmy-jumping (hey, I never said it was the most politically-correct video game ever). To me it feels like a proto-NES platformer, albeit on a much smaller scale. I’d be lying if I said I get the same jolt from the game that I got when I was 12, but considering the immense enjoyment it’s given me over the past three decades, it’s fair to say this 6K cartridge packs a punch disproportionate to its technical capacity. A