On startup, Mines of Minos did not make much of an impression. There’s a lobster-like robot protagonist surrounded by fairly standard Atari maze graphics a la Haunted House or Entombed  – it’s definitely not candy for the eyes or ears. And what’s with this only one life crap? But once it gets cookin’, man it’s a keeper.

As far as the one life is concerned, it’s actually up to you to create extra lives of your own – in fact, it’s almost the entire point of the game. As the story goes, you’re the lone robot survivor of an alien attack. Hopelessly outnumbered by a wide range of aliens, it’s up to you to build new robot reinforcements with spare parts littered throughout the five-level maze (the levels are differentiated by colour, Haunted House-style). You assemble the robots by taking the parts to either the top or bottom of the scrolling screen, in the meantime either avoiding aliens or blowing them up with your unlimited supply of mines. Depending on the variation you’re playing, it will take either three or six pieces to complete a robot or extra life. Ultimately, you will need enough lives to accommodate a kamikaze mission on the fifth and final level, where you throw your robots at the aliens’ command center.

Despite its humble appearance, Mines of Minos has an epic quality and something all too rare in this era of video games: an actual way to win the game beyond piling up points. It features moments of legitimate suspense and a surprising amount of strategy. For example, it’s recommended that you build at least two robots before proceeding to the second level. Otherwise, it will take twice the number of mines to kill the stronger aliens on that level. At the same time, you have to be careful not to spend too much time on any given level or else you risk facing faster and meaner aliens.

And then there’s the flooding; the longer you take, the more the top part of the screen fills up with water. You can’t plant mines in water, at least on the default variation. The good news is that the game has enough variations that it will always be as difficult as you need it to be: from dead easy to hard as ass and everything in between.

The game has its faults. Its control could be better, for one. Much like other maze games for the 2600, you have to plan your cornering in advance or else you can easily get hung up in a doorway. I also found the mechanic for advancing to new levels a little difficult. Otherwise, because of its exciting, absorbing gameplay and sense of purpose, Mines of Minos achieves hidden gem status. B

Miniature Golf is an incredibly lame game that I can’t stop liking in spite of myself. The graphics are putrid, even by Atari’s 1979 standards, and the sound is limited to the same “ping” familiar to anyone who’s played Pong. Heck, it was considered so bad that even back in 1979, when there weren’t a whole lot of video games to compete with, it was pulled from the market. And yet every time I play Miniature Golf I enjoy it. I find it . . . relaxing. It’s not particularly hard; you can fairly easily make par on several of the nine holes. The moving obstacles do not present much difficulty most of the time. A number of people complain about the bank-shooting you have to do to get the ball to go anywhere, but I consider that more of a feature than a flaw. So am I actually recommending Miniature Golf because it’s easy? No, I’m recommending it to a specific demographic of older gamers inoculated to the minimalism of the 2600’s early graphics who just want something to chill out to after a day at work. It will hold little appeal for virtually anybody else (except possibly for collectors – its limited print run has made it a minor collector’s item). C- 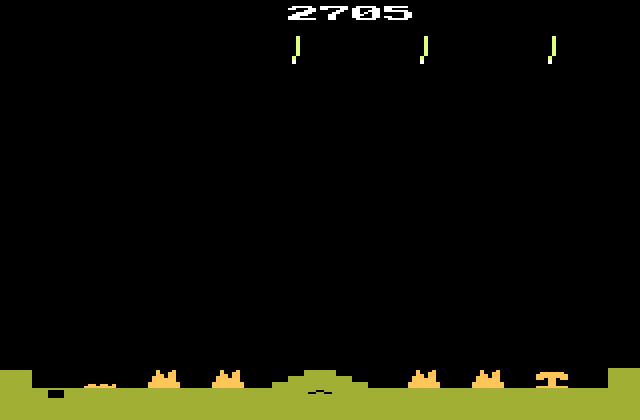 Is this review even necessary? Has the greatness of Missile Command ever been in dispute? Not for me, anyway. To me it’s both one of the greatest Atari 2600 titles and one of the greatest video games of all time in virtually any incarnation. Along with Asteroids and Centipede, Missile Command represents Atari’s zenith as a designer of arcade games. Knowing the sophistication gap between their arcade hardware and their existing home units, Atari wisely kept the graphics of their coin-op versions minimal, which meant that little was lost in translation between the two mediums. All we’re missing in this port is the three-silo shooting action and the aliens, but neither significantly minimizes the fun you’ll have playing 2600 Missile Command. If you’re a nit-picker, Imagic’s Atlantis comes to the rescue when it comes to the three-point shooting (yay free market!). Or you can take solace in the fact that even the supposedly more sophisticated 5200 port (and I believe the 8-bit computer translations as well) only featured one silo as well. Missile Command is a must-have for your 2600 collection and considering how plentiful copies are, there is no excuse to not own it. A+

Not a lot of information available about this German (?) produced cartridge. It’s nothing to write back to the chancellor about though. Mission 3000 is basically an Asteroids ripoff with poor directional control and beyond-suspect collision detection. It reminds me a little of the awful Great Escape, except this one isn’t quite as disastrous. It’s still far from essential, but if you feel like you need a substandard Asteroids semi-clone in your life, by all means have at Mission 3000. It’s scarce but not extremely rare. D-

Mission Survive is a poor ripoff of Moon Patrol with some of the most non-intuitive controls I’ve ever encountered: you push right to fire and the action button to “jump” (retract your moon buggy’s wheels momentarily, actually). Since they’re ripping off everything else, why not just do the same with the 2600 Moon Patrol controls? Maybe Mission Survive came out first (I don’t know for sure), but c’mon, we’re talking about a game that moves in two directions, fires in two directions and jumps – how hard can it be to figure out intuitive controls? Otherwise, Mission Survive is standard third-party shovelware with passable graphics and awful sound. It may have been semi-playable if not for the control scheme. F