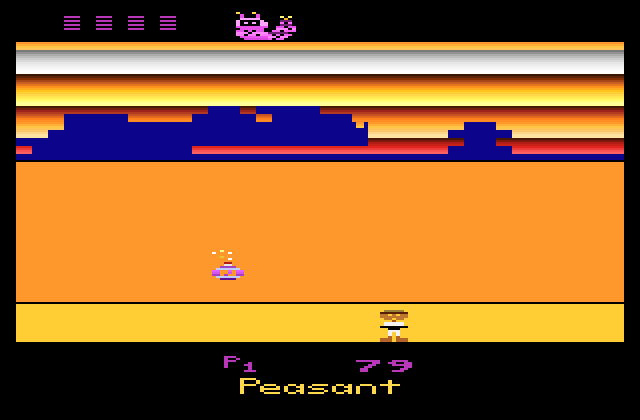 It’s kind of fitting that a system which began its life partly as a platform for ball and paddle games should, near the end of its esteemed run, see the release of a ball and paddle game. Off the Wall is a good game that updates the classic Breakout gameplay with a more modern Arkanoid approach featuring power-ups.

If Off the Wall is hampered by any one thing, it was the decision to make it a joystick game rather than a paddle game which is, for me, a crucial sticking point. Paddles offer precision control that you need for this kind of game. I’ve always been frustrated by Atari’s decision, about halfway through the life of the system, to eliminate paddles as part of the system package, especially considering how many of their games (among them some of the console’s best) relied on paddles. Imagine if Nintendo had stopped including nunchuks with the Wii; sure, they’re not necessary for a lot of games, but not having them hampers your ability to enjoy the console to its fullest.

Unlike Breakout, the point of Off the Wall isn’t to destroy every brick in the matrix but to destroy the dragon at the top of the screen four times before going on to the next level. You can catch a number of tokens that will help you in your goal, including a nuke ball (your ball destroys more bricks at a time), magnetic paddle (you control the ball as it goes upward, reminiscent of that one variation in the original Breakout cart), zig-zag (self-explanatory) and mega paddle (your paddle becomes bigger). Mystery tokens can either help you (give an extra life or bonus points or stop the blackbird that starts causing difficulty on the second level) or hurt you (speeding up the ball which, as all Breakout veterans know, makes proceedings much more difficult).

The graphics are nice and colourful. I like the fact that you can hit the ball from the side, which made up somewhat for the joystick controls by decreasing the precision needed to hit the ball. It’s worthwhile to have in your collection if for no other reason than it’s the closest thing to Arkanoid (one of the great arcade games of the late ‘80s) available on the 2600. Challenging and fun. B 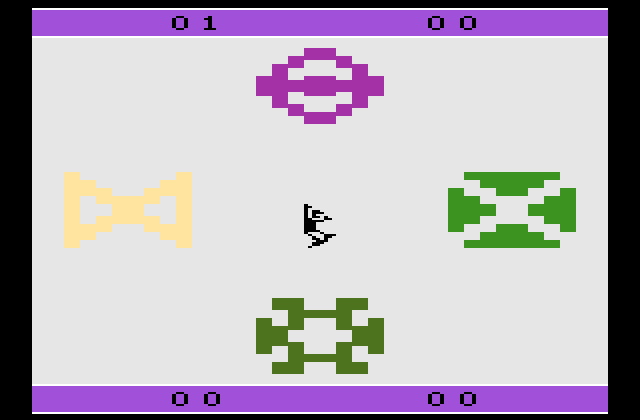 Off Your Rocker (Amiga Prototype, Developed 1983)

Not much to this prototype based on the Simon electronic game. And that’s pretty much all this is: if you’ve played Simon, you’ve played Off Your Rocker. The only difference is that there’s a little dude in the middle of the screen who tilts his joyboard (the game was meant to be played with the Amiga Joyboard although it can also be played with a standard joystick) in the direction of the button you “push.” Get a pattern wrong and the guy falls on his butt and an ambulance appears, which seems like a pretty strong penalty for losing a game of Simon. If you feel you need a Simon-like game for your 2600, Atari’s Brain Games is much more readily available. Personally, I think you’re better off just getting an actual Simon game.

I wouldn’t call Oink! one of Activision’s greater efforts, but it’s a fun example of twitch gameplay that I found had me hitting the “reset” button far more often than I had intended to do so. It’s essentially a reverse Breakout (I seem to be referencing that game a lot lately) in which you – as one of the Three Little Pigs – attempt to rebuild your house as the Big Bad Wolf blows it down brick by brick. The square “objects” – whether they be straw, stick or brick – are placed at the top of the screen and you must be within their vicinity to grab them. In the “B” difficulty you can drop these objects from anywhere on the screen, but in the “A” selection you have to pick up a brick and bring it all the way to the bottom before dropping.

Although the Three Little Pigs theme is a nice gimmick, the relative construction merits of straw, sticks or brick do not matter here; in fact, once the pig with the straw house is captured, the stick and straw houses just get harder to protect. You should probably focus most of your efforts on getting as high a score as possible with your first pig because it’s not going to get any easier from there.

Also, you will never completely rebuild your “home” – your best bet is to try to prevent the wolf from blowing a big enough hole to suck you in through, so there’s a little more strategy required in Oink! than initially meets the eye. A neat thing about the game is that you can escape the wolf’s tongue (breath? I can’t quite figure out the physics of the thing) several times before he actually captures you, but he can also attempt to do so several times in a row, which created some considerable frustration in this particular player.

Some of the game’s sounds seem to be lifted from the 2600 version of Super Breakout, but considering the nature of the game I’ll leave it to you to decide whether it’s theft or tribute. The pigs and the wolf are well-rendered and the whole game is very colourful as per Activision’s typical standards. It’s not the greatest game on Earth but it will probably keep you hitting reset for “one more game” for an hour or so. C+

More Info: Oink! on AtariAge. For current listings of Oink! for sale on eBay, click here

Okie Dokie did not slay me, but it partly had something to do with my own attitude. I suddenly started having some anxiety over the massive scope of this project – it really is my goal to review every commercially-released game, playable prototype and homebrew ever released (or to be released) for the Atari Video Computer System. If you can attach a controller to a 2600 console and play it (I call this the McDonald’s sniff test based on that prototype’s unplayable single screen) I want to review it. I’ve already missed quite a few, so in addition to backtracking I still have half the alphabet ahead of me. I’m not complaining though – I love doing this blog.

Designed by Bob Colbert, Okie Dokie is a puzzle game, which I generally like. Your goal is turn off a screen full of objects, which would be easy if not for the fact that for every object you turn off, a whole new set turns back on. I must confess it stymied me. I think the concept is similar to Reversi, but I’ll know a little more about that once I review Othello within the next couple of weeks (note from later that day: it isn’t). It features 30 preset puzzles and over 400 random puzzles, so if you like it you’ll have plenty of gameplay value.

The game looks lovely; I like the wide variety of objects including aliens, monsters, jacks, crosses and more. It didn’t blow my socks off, but that could come down to personal preference. C

You can buy Okie Dokie at the AtariAge Store.

I always enjoy seeing vector games like Omega Race and Gravitar make their way onto the Atari 2600. Because the only platform equipped to handle vector graphics at the time was the Vectrex, there was generally a level playing field graphically with these games among the Atari 2600 and its more powerful competitors. Oh sure, occasionally there would be attempts to pretty up a vector adaptation with colour (like Atari itself did with Asteroids and Battlezone) but often developers would simply try to recreate the vectors with raster graphics, which is the case with Omega Race. The result is a narrowing of the graphic quality valley between the 2600 and the Colecovision versions. As a result, we can focus on gameplay quality.

Omega Race is a game heavily inspired by Asteroids that uses that game’s rotate-and-thrust control mechanic (more on the specific control scheme later). The primary difference is that your ship – in a profound but fun misunderstanding of how this whole outer space thing works – can bounce off the side of the screen or off a rectangle in the middle; in the arcade game this box was used as a placeholder for your score. The rest of the game is fundamentally simple: you shoot down waves of enemy spacecraft and avoid being shot yourself. The real fun of Omega Race is controlling your ship amid all the bouncing; otherwise, it’s not much more than an Asteroids clone.

The good news, based on a look at the arcade original on YouTube (I’ve never actually played the coin-op), is that 2600 Omega Race captures most of the sights and sounds of the original. The bad news is that CBS Electronics made it necessary to use its special “Booster Grip” handle that you slip over the 2600 joystick. The button on the top of the Booster Grip controls fire while the regular action button activates thrust. I’m not sure how rare these Booster Grips are today (I’m assuming very) but it makes it kind of a pain for people wanting to play on original hardware. However, I’ve heard you can use the Sega Master System controller to assist with this. The Stella emulator I use supports Booster Grip so for me it was just a matter of setting the appropriate key to one that was comfortable. Honestly, though, I don’t know what was so bad with the left-right-to-rotate and forward-to-thrust system used by similar games like Asteroids and Gravitar.

Omega Race generally plays well, although I found it a little easy compared to the Colecovision version, a fact made worse by its single difficulty setting. I don’t understand why CBS didn’t use the middle rectangle for game info; otherwise, it just seems to hang there. Omega Race is fun enough to warrant a recommendation but barely enough so to tackle its hardware challenges. C