Parachute is a game so rare AtariAge doesn’t even have a rarity rating for it. It’s too bad it’s not a little more well-known because unlike many rare and European-produced games, it’s not terrible. In fact, it’s mildly enjoyable in small doses.

Parachute has you jumping from an invisible airplane 15,000 metres above the surface. On the way down you encounter about seven screens full of airplanes, birds, hot-air balloons and helicopters that you must avoid. You drop faster with every progressive screen. By the third round the obstacles start moving at an angle, making your mission more challenging.

The graphics are 2600-gorgeous, although some of them seem to be ripped off from games like Fathom and the Swordquest series. There is background music but it’s a little too lullaby-like for my tastes. The gameplay is fine if not especially deep; I think it would have added some challenge to include wind factor a la Atari’s earlier Sky Diver. If you play Parachute be sure to switch your left difficulty control to “A” for the actual game; the “B” version is a practice variation in which you don’t lose any lives if you hit an obstacle. Okay game but not crucial. C-

More Info: Parachute on AtariAge. For current listings of Parachute for sale on eBay, click here

I’ve been avoiding reviewing this preschooler’s prototype game all week. There’s not much to Peek-a-Boo; to the best I can figure out you hide a (nicely-drawn, to the game’s credit) fox behind blocks. The fine folks (folk?) at Atari Protos have summarized each of the eight game variations, but I admit I got bored halfway through reading about them. I think this one would have been targeted to kids even younger than those for whom the Sesame Street series of games was intended. Nothing to see here for grownups.

More Info: Peek-a-Boo on AtariAge. For current listings of Peek-a-Boo for sale on eBay, click here 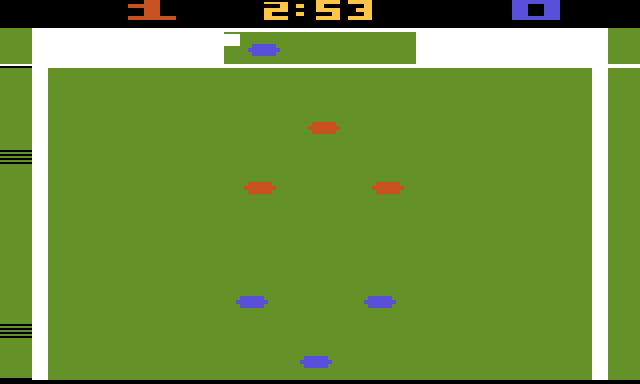 A funny thing happened as I played Pelé’s Soccer: despite virtually everything working against it (especially graphics), I started to kind of enjoy this quirky little game. Be prepared, though: it’s not like any video soccer game you’ve ever played or likely ever will play.

Let’s tackle the elephant in the room right now: the atrocious almost-non-graphics which are primitive even by the standards of VCS games of that era. Your four players – a forward, two defenders and a goalie – are represented by blocks that shoot out a little “leg” when they kick the ball. It’s a little embarrassing, but I got over it by pretending it was one of those handheld Mattel electronic sports games (they were more like glorified calculators, really) that were so popular around the time of Pelé’s Soccer’s release.

Oh yeah, the players. Well, that’s really quite interesting. The three players comprising your forward and defensive lines are arranged in a triangular pattern that you control in unison. Although much WTFness transpires when you start to play the game, with practice you may soon discover that this formation provides a remarkably efficient system for passing between other team members. Pity you’re never allowed to kick the ball very far, though.

The remarkable thing is that with this ludicrous setup programmer Steve Wright managed to capture the basic spirit of soccer – much more so than Atari managed with Home Run’s attempt at baseball or Football. Games against the computer are typically low-scoring affairs (just like real-life soccer) with most six- to ten-minute games (divided into halves) spent scrambling for the ball. This takes a terrible toll on one’s wrist; I was using a computer keyboard but further reading revealed that Pelé’s Soccer is just as punishing for those using a joystick. Every time a goal is scored a nice fireworks screen pops up, representing the sole visual treat in an otherwise no-frills game.

Pelé’s Soccer was also marketed as Championship Soccer (and simply Soccer in its Sears incarnation) but I’m not sure whether Atari released Championship Soccer first and then won Pelé’s endorsement or if they eventually lost the tie-in. Either way it’s the same game. Pelé’s Soccer deserves a play or two, if for no other reason than there’s simply nothing else like it. C

It’s unfortunate that the game-playing audience that threw their collective toys out of their cribs over E.T. and Pac-Man didn’t stick around to see the Atari 2600 really flower with 1984 titles like Crystal Castles, Montezuma’s Revenge, Millipede and Pengo (not to mention should-have-been released games such as Aquaventure and Saboteur). Pengo would have been one worth waiting for.

Pengo is an adaptation of an action-puzzle arcade game filled with a magical combination of strategy and whimsy that marked the best of the classic arcade era. In it you play a penguin up against a bunch of bird-like creatures called Sno-Bees. You can play Pengo one of two ways: you can focus on killing the Sno-Bees by crushing them with ice blocks or, for the really big points, line three jewel blocks together. Lining these blocks against a wall gains you 5,000 points; away from a wall nabs 10,000.

Pengo is almost as perfect as an Atari 2600 game gets, complete with delightful graphics and a catchy tune that can be turned on or off. The only thing that takes away from the experience is the controls, which feel a little sluggish at times. However, it’s not a significant enough of a problem to take away from the fun Pengo has to offer. A

More Info: Pengo on AtariAge. For current listings of Pengo for sale on eBay, click here 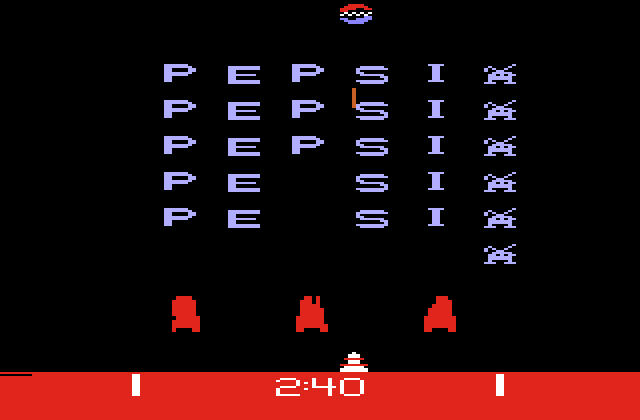 If you ever come across Pepsi Invaders out in the wild, expect to pay handsomely for it as there were only 125 copies ever produced. And if you pay that much for it, you definitely WON’T want to play it, so rest assured it’s just Atari Space Invaders with the five rows spelling out “PEPSI” plus an Invader to fill out the row. Aside from a nicely-done Pepsi logo in place of the spaceship, the only other difference is that each game only lasts three minutes (not sure why Atari did this). Apparently Atari designed Pepsi Invaders exclusively for a Coca-Cola sales convention in 1983, with executives given the cart plus an entire Atari 2600 to play it on (wow – Atari really was desperate to move their stock back then weren’t they?). I adore Atari’s version of Space Invaders and anything that comes close to it, but I think I’ll save my grade for the actual Space Invaders review rather than this well-done but extremely rare novelty.