I have long considered my knowledge of late-‘70s, early-‘80s arcade games to be fairly comprehensive, but as I continue on with this blog I’m frequently surprised by ports of games I had never heard of before. Polaris – released by Taito in 1980 – is one of them. It’s a testament to the dominance of the arcades at that time that any coin-op licence – even if it was older, obscure and, at least according to this review, a fairly blah outing – was still a feather in the cap of a relatively minor third-party console game distributor like Tigervision circa 1983.

I’ve never played the arcade Polaris, but judging by what’s available on YouTube, the 2600 port might be the better game. It’s comparable graphically and soundwise and – get this – it actually adds a River Raid style extra screen that differs completely from the arcade gameplay. Compared to the coin-op, which appears to throw the proverbial kitchen sink at you right from the start, the difficulty of the 2600 version ramps up reasonably.

You play the operator of a nuclear sub in charge of shooting down bombers in the sky and enemy submarines in the sea. You can only shoot up, so you have to get right under the subs in order to destroy them. That part’s fairly easy. What’s more difficult is when dive bombers come and shoot heat-seeking missiles at you. Your best bet is to shoot the bomber before it fires; otherwise, be prepared to dodge the missile.

That completed, you’re taken to a completely different screen, in this case a channel with an overhead view. You have no enemies in your first go-round in the channel, but it’s still valuable as practice because the controls are pretty tricky and it’s all too easy to crash into land. Later incarnations of the channel run feature mines you must either dodge or shoot with play mechanics similar, again, to River Raid. The submarine beeping sounds are sparse but effective, and even strangely ominous in the cramped quarters of the channel run.

Polaris is an above-average port of an average arcade game. Its source material may not have been the best but you gotta give Tigervision credit for making a pretty decent game out of what they had. It’s still not necessarily a must-have, but it’s worth a couple of plays. C+

More Info: Polaris on AtariAge. For current listings of Polaris for sale on eBay, click here 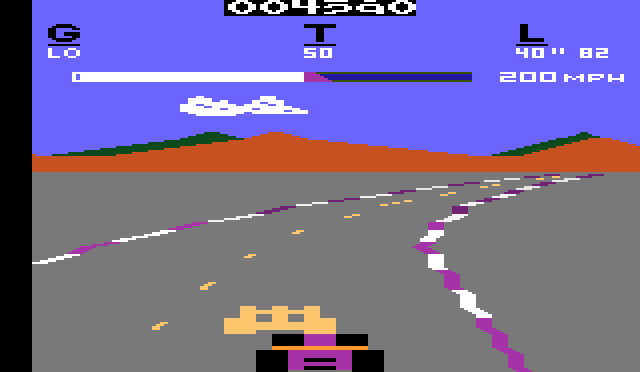 Pole Position is one of those Atari arcade ports that was ultimately upended in fan opinion by an effort from a third-party software developer. For Phoenix, it was Demon Attack. For Battlezone, it was arguably Robot Tank. For Pole Position, it was Enduro. All of the above-mentioned Atari ports are exceptional, and I certainly don’t always agree with general fan assessment (especially when it comes to Phoenix versus Demon Attack), but when playing Pole Position I couldn’t help but compare it to Enduro, which is simply a better game.

Don’t get me wrong: Pole Position is a very good game. The coin-op of Pole Position was a monster in its day, especially graphically. I can imagine the developers of the Atari 2600 cart were themselves surprised that they could pull it off so faithfully. Despite that, some of the VCS’ old limitations come to the forefront; the opponent cars scale choppily, sometimes making it difficult to pinpoint your own way around them. Enduro’s opponent cars, meanwhile, approach smoothly.

Pole Position is also limited by its five-lap maximum. While Enduro will happily keep going as long as its player can, with Pole Position once you’re done that fifth lap, you’re done. From there all that’s left is to try to achieve as perfect a game as possible (no crashes, consistently smooth driving) which, while challenging, can be accomplished relatively easily.

There’s no doubt that Atari did a heck of a job adapting Pole Position to the 2600, and if you like racing games there’s no doubt you should play it because – Turbo excepted – the history of racing games as we know them pretty much started here. However, if I haven’t made it abundantly clear already, I’ll take Enduro over it. B

It’s pretty hard to review a game when you can’t see what’s going on. Although Polo could have been a nice fast-action sports game, the colour choices and technical limitations make it very difficult to make out what’s going on. According to Atari Protos, programmer Carol Shaw (who would later go on to make Activision’s River Raid) used a “Venetian Blinds” technique on the player sprites in order to alternate them between two sets of scanlines. This tends to make the yellow player – the default sprite in one-player games – particularly flashy. And because the playfield is so small, the game reverts to Pong-style ball mechanics which frequently make scoring more a matter of luck than anything else. To her credit, Shaw threw in a lot of neat variations (smaller goals, faster balls, wraparound balls, one player controlling two horse and riders in tandem) to keep things interesting, but the fundamental problems of Polo come down to the aforementioned technical issues. I think some of these earlier VCS games – protos or not – may have been better served as black-and-white only (Outlaw comes to mind).

As a side note, someone involved with AtariAge designed an era-accurate instruction manual for Polo and did quite a good job. Check it out if you’re a fan of the various peripherals (manuals, artwork, labels etc.) around 2600 games.

More Info: Polo on AtariAge. For current listings of Polo for sale on eBay, click here 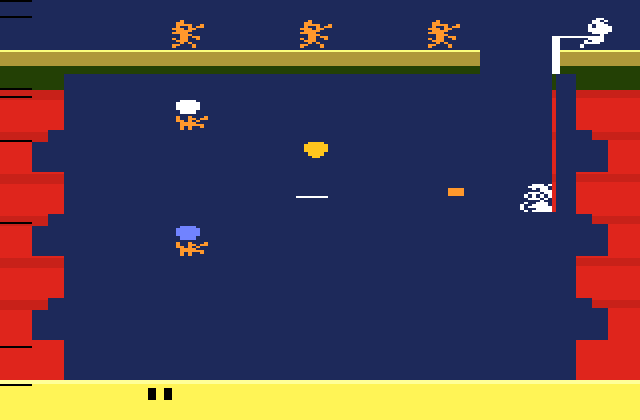 I quite liked this version of Pooyan but, mind you, I’ve never played any other version of the game. As many complaints about Atari 2600 ports are based on graphics, I’ve made it a practice lately to check YouTube for visuals of arcade games I’m not familiar with. I found this video which compares the arcade Pooyan to a host of ports available for contemporary systems, including the 2600, as well as relatively modern platforms. Guess what? None of the other, more powerful contemporary platforms made the grade in terms of the graphic fidelity of the arcade original either, although the Casio PV-1000 (a computer or console I haven’t even heard of before) came awfully close.

This is a case study in not judging the Atari 2600 too harshly based on graphics; it wasn’t until sometime in the ‘90s that home consoles and computers could duplicate what was going on in the arcades of the time. The 2600 gets most of the abuse because it was the grandpa console desperately trying to keep up with the times, but none of its competitors – the other consoles and computers – were doing that great a job of transferring the arcade experience to the home either.

So having looked at all these other translations on other home systems, it’s my impression that 2600 Pooyan plays quite nicely compared to the other versions, and may even be somewhat more challenging. If you’re not familiar with Pooyan, it’s a simple game in which a mother pig defends her babies by shooting at wolves descending (or ascending, depending on the level) on balloons. If a wolf lands on the ground in the first level, he’ll stalk the mama pig from behind. If enough wolves reach the top in the second level, they will push a rock on the poor mama’s head.

I had a lot of fun playing Pooyan. Maybe I need to play a few more versions in order to make this statement with authority, but to me the 2600 port played just fine. Yes, the animation is a little choppy but it didn’t take away from my play experience. B-

More Info: Pooyan on AtariAge. For current listings of Pooyan for sale on eBay, click here

Video games simply didn’t get better graphically in 1982 than Nintendo’s Popeye arcade game. Looking at it was like watching an old Fleischer Studios cartoon, and possibly featured better animation than the Saturday morning iterations of Popeye my generation was more familiar with. More importantly, though, Popeye was a hell of a platform game full of bottle-punching, spinach-eating, Brutus-bashing action. The Atari 2600 did not have a prayer of capturing the graphical flourishes of the coin-op (but neither did any of its contemporaries, up to and including the NES port) but it nicely captures the general feeling of the gameplay without being as insanely hard as the original.

Although Parker Brothers had to jettison a lot to fit Popeye onto a VCS cartridge, let’s focus on what we do have. Well, we have all three screens – not a common thing for multi-screen platformers of the time. We have Popeye, Brutus and Olive Oyl as single-colour but nicely animated sprites nevertheless. We have beer bottles and spinach, albeit represented as single green pixels. We do not have a visible Sea Hag, although she is supposedly the one throwing bottles at you once you capture a heart, note or letter. There are also no buzzards in the ship level or skulls in the second go-round. Will you miss these elements? Possibly, but what’s left still provides some considerable play value.

We also have to consider the fact that there just aren’t a lot of ways to play Popeye anymore and you could probably consider yourself lucky to find a machine out in the wild. The Popeye license seems to have deteriorated in recent decades and I’m not aware of very many efforts to keep this classic title alive. All things considered, you could do worse than 2600 Popeye; the NES version is closer graphically to the original but for my money this unassuming little port is still a lot more fun. B+

More Info: Popeye on AtariAge. For current listings of Popeye for sale on eBay, click here

One thought on “Atari 2600 Game Reviews: Polaris through Popeye”