The Atari 2600 and the Nintendo Entertainment System were the biggest consoles of two decidedly different eras in video games. However, they share a surprising number of titles, particularly when it comes to ports of classic arcade titles of the early ‘80s. This is the first in a series that will compare games that were ported to both systems.

So how am I going to do this? First and foremost I’m throwing graphics, sound and superficial likeness to the arcade original right out of the equation — the NES will win hands-down every time. I will generally only refer to graphics or sound if they are either exceptionally good or exceptionally poor by the standards of either system. Instead, I’m judging the titles based on challenge, control and — that most vague of categories — the amount of fun I had playing them. First up is BurgerTime.

The game. BurgerTime is one of the most beloved — and most difficult — games of the golden age of arcade video games. Released in 1982 by Data East, the game features chef Peter Pepper attempting to build burgers made up of ingredients located vertically across a matrix of columns and ladders. Peter builds the burgers by walking over the length of the ingredients, which include a top bun, lettuce, a burger patty and a bottom bun. For reasons known only to the gods of early-’80s video games, Peter is pursued relentlessly by food items including hot dogs, eggs and pickles. His only recourse against these enemies is to temporarily freeze them with his limited supply of pepper or, preferably, squash them in between food items for big points.

Mattel Electronics was not known for aggressively pursuing the home rights to arcade games, but it scored a bit of a coup when it obtained the rights to port BurgerTime to its own Intellivision and — through its M Network subsidiary — the Atari 2600 in 1982. I’m not sure exactly when the NES version of BurgerTime came out, but we can safely assume it was in the mid-to-late ‘80s. It carries a copyright of 1982 Data East and a note licensing it to Nintendo, so I’m not sure which company actually designed the port.

Challenge. BurgerTime is a bloody hard 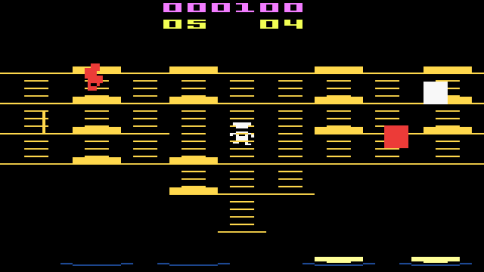 game no matter what platform you play it on. The NES’ ability to produce more moving objects puts the difficulty level more or less on par with the arcade game, which means there are a lot of angry edibles coming after you. It takes practice, but becomes enjoyable when you figure out the various patterns your enemies move in.

The Atari 2600 version is challenging as well, but not necessarily in a good way. Peter Pepper moves very slowly and, as luck would have it, seemingly slower than the enemies that pursue him. The graphics are simply atrocious (and yes, by 2600 standards) and actually interfere with gameplay. For example, the “egg” is represented by a poorly-animated spinning square which makes the player’s own collision detection difficult, which is not to mention the frequently-suspect collision detection of the game itself.

All that said, I was able to get to the third screen in the 2600 version. Meanwhile, I have yet to make that benchmark in the NES version in spite of a comparable number of plays. I would say the NES version is harder than the 2600 port, although the technical faults of the latter conspire to make the former not considerably harder.

Control. As noted previously, Peter Pepper in 2600 BurgerTime moves abominably slow. However, the player is generally able to move the character between platforms and ladders with relative ease. Although NES Peter Pepper moves faster, there is frequently difficulty in dismounting the character from a ladder, leaving him a sitting duck for an enemy. This flaw can be overcome with practice, but until that point it’s awfully aggravating.

The fun factor. For me, NES BurgerTime wins this category hands-down. The gameplay is about as close as you can get to the arcade, and it’s just an awesome port of an awesome game. Still, 2600 BurgerTime isn’t a complete disaster. In spite of its slow movement and awful graphics, the gameplay is still recognizably BurgerTime, and I find it has just enough of a “one more game” factor to make it decently fun. Given no other options, it’s still a satisfactory BurgerTime experience.