There were so many times I wanted to tear Save Mary a new one over the course of playing it, but it almost always managed to make a comeback and win me over. Save Mary is the story of a dizzy broad who gets herself stuck in a canyon filling with water – as one does – and it’s your job to rescue her by dropping a variety of bricks which you piece together to form a platform Mary can climb onto before the water consumes her. Naturally, you have to be careful not to drop the bricks on Mary’s head (something she doesn’t make any easier by insisting on hopping all over the place) so you have to time your drops well. Fortunately, there’s a power-up that briefly freezes Mary so you can go about the job of saving her without her interference.

It’s obvious that Atari (or more accurately the actual developer, Axlon) was going for a Tetris feel with this game, and in a lot of ways it does feel like an upside-down version of that game. I wish they would have put more variety into the colour of the bricks just to make them more distinguishable, but that’s a fairly minor objection. I was ready to write the game off halfway through my play experience but as I got used to the game mechanics I found it tremendously satisfying to get a set of bricks just in the right place.

I’m not taken with the overall look of the game (Mary herself is particularly galling) and it would seem that by 1990 most Atari programmers were better-able to make a graphically-appealing game for the system. It also relies a lot on a particularly-horrendous squishing noise that was all too common in 2600 games. Save Mary is an okay game as largely-complete, abandoned prototypes go, but it’s no Aquaventure or Saboteur (but then again, what is?). C+

Save Mary is available on the Atari Flashback 8 Gold. For eBay listings, click here

More Info: Save Mary on AtariAge. For current listings of Save Mary for sale on eBay, click here

Another prototype? Well, anything that slows down my alphabetical progress towards a whole lot of Froggo/Sancho/Panda badness is okie-dokie by me. Save the Whales was the first in what was intended to be a series of games to be released as a benefit to the Greenpeace organization. You control a submarine that protects the whales underneath you by shooting the whaling nets and harpoons (at least there are supposed to be harpoons – I saw no such thing in my version despite adjusting my difficulty settings as instructed) launched from a boat at the top of the screen. Every once in a while columns of – um – things come out to make your life miserable. They’re not worth any points, but as your lawyer I advise you to shoot them because they can kill you. The game ends when either all the whales have been captured or you’ve been hit three times by a net (what kind of submarine is destroyed by a net?) or the columns of things I referred to earlier.

Save the Whales is a challenging game but not particularly fun. It has elements of Activision’s Seaquest but none of the enjoyment of that title. The collision detection is not great and the graphics and sound are nothing special. However, it does appear to be complete, although some game variations do not appear to feature any gameplay. It’s okay for a proto, but I’ve seen better. D+ 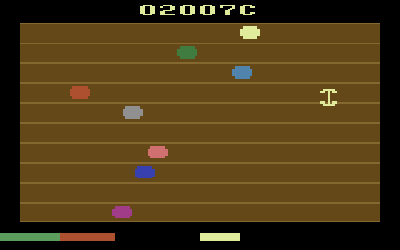 Programming the score counter for your game to display in hexadecimal is probably the epitome of geeky, and that’s from a guy who writes reviews of video games designed for a 128-byte console released 40 years ago. That out of the way, SCSIcide (what a name) is a decent homebrew with some serious off-market programming talent behind it (although this is Joe Grand’s only title to date, the display kernel was provided by Piero Cavina of Oystron fame). In spite of the instruction manual’s intimidating gobbledygook about bit counters and latency buffers, SCSIcide is really just a highly-entertaining action-memorization game. Using your paddle controllers, you catch the blocks that are the same colour as your catcher and avoid the ones that are not until all the blocks on the screen are caught (the colour of your catcher changes each time you successfully catch a block). As expected, the blocks move faster with every successive level, at times creating a Kaboom!-flipped-on-its-side feel. SCSIcide is exactly what you want from an Atari 2600 paddle game: not a lot of depth, but a lot of reflex action that tests the limits of your hand-eye coordination. B

More Info: SCSIcide on AtariAge. For current listings of SCSIside for sale on eBay, click here

Panda, Sancho and Froggo were the absolute bottom-feeders of the third-party Atari 2600 software community, with almost all of their products crimes against humanity that still need to be reckoned with to this very day. What’s worse is these cretins cannibalized each other, with all three of the culprits listed above releasing Scuba Diver at one point or another. It didn’t deserve to be released even once.

I don’t know why I should bother explaining the gameplay when it’s practically unplayable anyway (seriously, CommaVid’s Rush Hour is more playable and it was a far-from-complete prototype), but here goes. Basically you’re a scuba diver going underwater to kill a bunch of fish before they eat you. Why? I have no idea. You have no control over your diver until you’re halfway down the screen. You can then harpoon the fish but good luck – half the time the collision detection doesn’t work and you’re left there a sitting duck (oh yeah – did I mention that you can’t move while you’re using your harpoon?). You have sixty seconds to harpoon all the fish and get back into the boat but you will die before that ever happens.

Scuba Diver is one fugly game, even to VCS-acclimated eyes like my own. The big fish at the top (I’m assuming it’s a shark) is so blocky and ugly that I couldn’t even focus on timing my jump out of the boat. The game is offensive to the senses on every level: it feels (plays) bad, looks bad, sounds bad, the cartridge probably even smells bad and – while I’m not suggesting any video game cartridge tastes good – probably tastes even worse than any other cart. Every copy of Scuba Diver should be dumped in the ocean where hopefully no real-life scuba diver will ever find it. F

Was any Atari kid excited to receive a Panda, Sancho or Froggo game back in the day? I suppose most of us didn’t really care much about labels as long as the game was good; problem is the titles they produced rarely if ever were. However, if there was one game from this bottom-feeding bunch that might not have caused a kid to give up on video games completely, it might have been Sea Hawk.

The first thing you notice is the graphics. They’re . . . actually presentable. Dare I say actually pretty decent? Oh sure, they’re nothing special, but the colour palette is tasteful and the blockiness is kept to a minimum. Gameplay-wise, Sea Hawk is a side-scrolling shooter in the vein of Defender. You shoot at helicopters in the sky and bomb ships on the water and, well, that’s pretty much it. The battles are surprisingly frenzied, bringing to mind a low-rent Chopper Command. One unique feature is when you’re shot down, a little man in a parachute leaps out and you have the opportunity to rescue him (and your current life) by landing him on a red allied ship.

But let’s not get ahead of ourselves. This is still a game from Panda, and that means they couldn’t help but include game mechanics that threaten to consume one’s enjoyment of the game. In this case it’s the shooting/bombing setup. To fire you have to push the joystick horizontally INTO whatever it is you’re firing at. Otherwise, the plane will drop a bomb. I don’t think I need to explain how frustrating this is. I realize the one-buttonitis of the 2600 doesn’t allow a lot of options for these kind of mechanics, but similar games such as Megaforce and Masters of the Universe: The Power of He-Man utilized respectable workarounds to this problem, but then again those two games were by superior companies (20th Century Fox and Mattel, respectively).

Otherwise, aside from being a semi-exciting side-scrolling shooter, Sea Hawk doesn’t have a lot to offer. There’s no secondary goal and no sense of mission or completion. Still, considering the source, it could have been a lot, lot worse. D+

2 thoughts on “Atari 2600 Game Reviews: Save Mary through Sea Hawk”