I apologize that this and my previous game review entry have not followed strict alphabetical order — I became aware of the existence of a couple of games after it was too late. I’ll try to be my typical OCD self in the future.

The title of Space Canyon by Panda keeps merging in my mind as “Space Panda” – which sounds like a far more intriguing game idea than the Space Cavern rip-off we get here. Seems to me that a lot of these third-rate game developers were quick to cannibalize each other’s ideas as soon as one of them (in this case Apollo) actually had a good one. Space Canyon pretty much is Space Cavern (getting confused yet? I know I am) with worse graphics and gameplay but the latter game’s multitude of game variations and the left-to-right firing action which made it unique. That said, it’s not a horrible play but it’s hampered by some annoying flashing bars on either side of the screen and some vertical lines at sea level (sea level? I thought this was a space game) which seem like a programming glitch. As these things go Space Canyon is okay but you’re better off just playing Space Cavern. C- 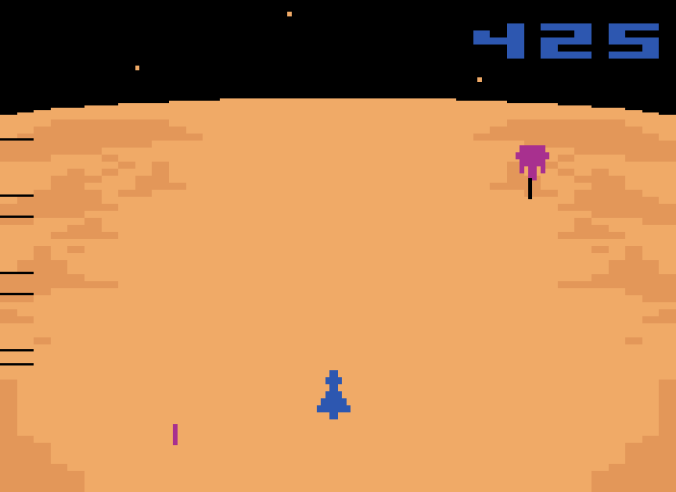 Wow – is this ever a hard game to find any information on. Even AtariAge – which is practically an online museum of everything Atari – had nothing on it, at least under its Apollo branding which you would think would have been the most prominent one on North American shores. But after playing Spacechase, there’s no surprise it’s been forgotten.

This review is going to sound a lot like my Space Jockey review below (I wrote that one first) because they’re practically the same game – the only real difference is that Space Jockey is side-scrolling while Spacechase scrolls vertically. Well, in actuality the background planet scrolls; it doesn’t really affect gameplay at all. It’s also the most handsome part of the game and I could watch it all day. Playing the actual game, however, is a different story: it’s a barely differentiated slide-and-shooter (you have eight-way action, so that’s nice I guess) with awful collision detection and monotonous gameplay with no object other than to shoot the bad guys.

Games By Apollo was an early contender in the third-party 2600 software game. Aside from Space Cavern and maybe a couple of others, their catalogue was pretty unspectacular. While Spacechase looks good – especially considering its company and its vintage – it feels like a bare husk of an actual video game. D-

((February 14, 2018 edit: Actually, there is information on this game on AtariAge. The problem is I was looking for Space Chase when the game is actually called Spacechase. My apologies.))

The Atari 2600 had an unconventional commercial life that could be divided into three distinct eras: the first (1977-1980) in which it was a cutting-edge toy for the upper middle class and above, the second, super-commercial era (1980-84) where virtually everyone wanted one, and a third, bargain-bin era (1984-1992) in which the console served as a panacea for less-prosperous families whose kids wanted video games. Not only did this mean that the console was at its commercial peak at a time when technically-superior consoles and computers had already hit the market, but it also meant it was on the market for two-and-a-half years before it was even on the average consumer’s radar. So what ushered in that second era? Almost everyone agrees it was the release of Space Invaders in February of 1980.

There’s no point describing the gameplay of Space Invaders – even on the outside chance you’ve never played it (almost statistically-impossible considering the readership of this blog), it has become so ubiquitous in pop culture that its sights and sounds have virtually become shorthand for “video game.” And the Atari 2600 port carries a legacy that has equalled – some might even argue surpassed – the arcade original.

Yes, the aliens look different and there are less of them. To which I say, who cares? If you must have a pixel-accurate rendition of Taito Space Invaders, the homebrew community has answered the call with Space Instigators. To me, Atari 2600 Space Invaders stands as an amazing game unto itself, with any minor differences compensated for by its multitude of game variations. Not all the variations are winners (how does two-player alternating directions even work?) but invisible invaders, fast bombs, zig-zagging bombs and moving shields all get the most possible value out of an admittedly limited game. No wonder VCS sales skyrocketed upon its release. Was there ever any doubt that Space Invaders would get any less than an A+?

Space Jockey is a very poor game, but the real shame of it is that it was created by Garry Kitchen; yes, THE Garry Kitchen who programmed Activision’s Keystone Kapers and Pressure Cooker – two of my all-time favourite 2600 games. I’m not sure what happened here, but I’m placing the blame squarely on U.S. Games or whichever company it was outsourced to.

Space Jockey is a standard-as-ass side-scrolling shooter with no secondary mission, no levels and no sense of achievement whatsoever. It is further hampered by atrocious collision detection. It looks okay but in that peculiar way that screams “third-rate Atari 2600 game.” It’s shovelware, pure and simple. I’m not sure where Space Jockey fits chronologically on Kitchen’s CV, but thank God Activision recognized what a talented game designer he could be because this game certainly doesn’t show it. F

Okay – I admit it, I got duped. I generally try to stay away from hacks, but Space Robot is a full-on hack of Atari 2600 Missile Command and a commercial hack at that. The only differences are you’re shooting down robots rather than missiles and you’re penalized if the robots hit the bottom of the screen, not just if they hit one of your cannons. Otherwise, the backgrounds and sounds are exactly the same as Missile Command’s – Dimax even included, hilariously, the bonus-ticker sounds even though no bonuses are offered. Despite their strong similarities, Space Robot is infuriatingly easy compared to its source material – most of my time playing the game was hoping it would end soon. At the same time, it does feature some of the inherently stellar gameplay of Missile Command, so I can’t give it a failing grade based on that metric. I can certainly give it an F, however, for being a rip-off.