Oh boy, here we go. I had enough problems with Shuttle Orbiter, which was a far, far simpler space simulator than Space Shuttle. This monster comes with a 32-page manual that reads more like a technical document than a video game manual – that’s because it IS a technical document. Programmer Steve Kitchen has long said that his game simulates the launch of a space shuttle down to the finest detail, which is an incredible achievement for the Atari 2600 and a quick way to shut down dumbasses who like to throw shade at the system’s abilities.

Unfortunately, this level of commitment is a little outside of my wheelhouse. Between my other responsibilities (including, but not limited to, my paid writing work, 12 hours of dialysis a week and various other commitments to wife and family), I just do not have weeks and months to study an extremely technical document in order to play a video game. I will, say, however, that if I had access to this game at the age of 11 or 12 I would have been all over it; with enough time on my hands, there would have been plenty to sink my teeth into. Maybe I can tackle it in retirement if any of this tech is still holding up by then.

That said, if you are looking for such a challenge, Space Shuttle is an amazing technical achievement and is well worth checking out on that level alone. I can’t in good conscience give this sim a letter grade (I sat through the automatic pilot variation but my attempt to play it was a disaster, so my play experience didn’t really go in-depth).

What developer Fabrizio Zavagli has created with Space Treat and Space Treat Deluxe is essentially “Frogger in space.” That’s not a criticism. The game (they’re pretty much the same game except the deluxe cart features scoring and some other minor refinements) is an eye-popping cornucopia of colour with enough challenge to engage even the biggest Frogger-head.

In Space Treat, aliens are holding your planet’s food supply hostage and it’s up to you to get to the top of the screen to grab whatever fruit or candy that’s there. The difference between this game and Frogger is you actually have to bring it back to the bottom of the screen, adding an extra layer of challenge. By the second or third level you have to grab a key (in the shape of a large square) that allows you to unlock the food item. And, just like Frogger, as the levels go on the various sets of aliens go fast or slow depending on which lane you’re in (ha – Alien Lanes – my callout to any Guided By Voices fans out there), forcing you to create a strategy that will get you across the playfield.

I lost track of the number of colourful objects Zavagli programmed into Space Treat’s gameplay. I found it funny that with all that detail he ultimately chose to make the key a square, but that’s no big deal. Of the two versions I recommend Space Treat Deluxe as it features scoring, which I’m sure that you – as a classic gamer who appreciates the standards of games from the early ‘80s – will probably want. Space Treat Deluxe can be purchased at the AtariAge Store. A-

. For current listings of Space Treat Deluxe for sale on eBay, click here 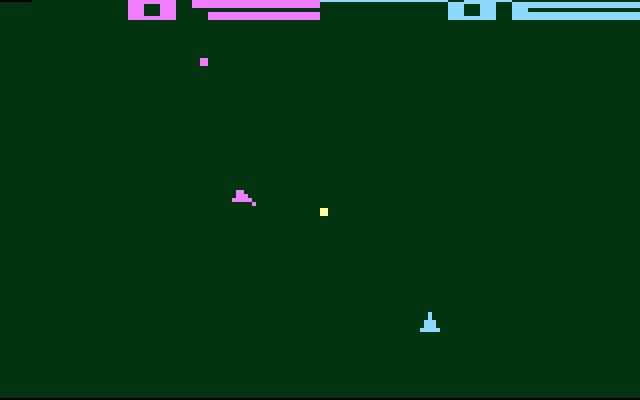 Space War gets a lot of flak and I’m not sure why – it’s basically Combat in space, complete with hyperspace, warp drive and an Asteroids-style rotate-and-thrust mechanic. Really, Atari’s early head-to-head two-player shooters – Combat, Slot Racers and Space War — are virtually critic-proof. If you like Combat, I see no reason why you should dislike the two-player variations of Space War. However, the one-player variations undo enjoyment of the cart quite a bit. The idea is you’re supposed to “dock” with a space shuttle. In reality you get about ten minutes to chase a dot around the screen. It’s harder than it sounds, but it’s also about as boring as you can imagine. The fun of the two-player games and the lousiness of the solo space shuttle variations causes Space War to meet square in the middle with a C.

Spacemaster X-7 may look like a first-person space shooter but it’s not; actually, with its ever-expanding and -contracting force field its gameplay harkens closer to the likes of Reactor than any conventional shooter.

The goal of Spacemaster X-7 is to destroy as many Hyperion military bases (that’s the structure in the middle of the screen) as possible. To do this you have to fly your ship in between the gaps in the force field while avoiding the various weapons the base throws at you. You have to be careful not to fire at the force field itself because the base gets stronger the more you do. As the game progresses it becomes harder and harder to broach the force field and the base puts up more and more defences (too long, didn’t read: there are a lot of things on the screen and if you touch any of them they will all destroy you).

I’m a sucker for vector graphics so Spacemaster X-7’s imitation vectors impressed me to the point where I almost preferred to look at them rather than play the game. Which is not to say its gameplay is lacking; in fact, I found it quite innovative. Mind you, I like games like Reactor and other “geometry” or “particle” (my own terminology) games, so your mileage may vary. While nothing spectacular, the sounds just scream early-‘80s arcade and that’s good enough for me. I’ll likely come back to revisit Spacemaster X-7, and considering the massive time commitment I have with this blog that marks a decently-strong recommendation. B-

I’ve been throwing a lot of shade at slide-and-shooters lately, mainly because so many games in that category from lesser developers tend to be less than inspiring. But leave it to Activision to give us a fun, fresh take on the genre with Spider Fighter.

The basic goal of Spider Fighter is to defend your fruit orchard on the upper-right-hand side of the screen from insect fruit thieves. One thing that differentiates Spider Fighter from many other shooters is that each enemy has a distinct job and there is strategy involved in deciding what to shoot first and when. For example, it’s advisable to shoot one of the spy pods in order to slow the hatching of reinforcements. An extra life is given for every round where the fruit is successfully protected – trust me that you’ll need them as the game progresses.

Spider Fighter is incredibly colourful, with smooth control and sometimes overwhelming action. It’s closer to the chaotic Demon Attack model of shooters than the more regimented Space Invaders/Galaxian style. Soundwise, I really like the almost military-marching sound your shots make as you fire continuously. While not the greatest game Activision ever produced (that’s a pretty tall order), Spider Fighter is one of the better slide-and-shooters available for the 2600. B