Well, I got duped again. Spiderdroid is a full-on hack of Parker Brothers’ Amidar and not a particularly good one at that. The control is particularly sluggish and inaccurate (the original wasn’t great on those counts, either, but they’re even worse here). Otherwise, just about everything else is the same, right down to the style of the score counter. The Froggo/Sancho group of companies were notorious for releasing poor games but at least they were original content most of the time – I never thought they would stoop to outright theft. I rated Parker Brothers’ Amidar a C+ but Spiderdroid gets an F for ethical reasons.

More Info: Spiderdroid on AtariAge. For current listings of Spiderdroid for sale on eBay, click here

Mixed feelings about this one. Spider-Man was a game I had as a kid, but in over 30 years my opinion hasn’t changed much: it’s a good game but it can also be a massive pain in the ass to play, at least until you wrap your webhead around its unique play mechanics.

Spider-Man puts a few spins on the basic Crazy Climber game mechanic. Using your limited amount of web fluid (take that Sam Raimi) you help Spidey scale a building to defuse a bomb the Green Goblin has planted at the top. The difference between Spider-Man and Crazy Climber is you can swing from side to side, picking up the Goblin’s goons and defusing smaller bombs (both of which add extra web fluid). Spidey will fall if his web touches any window or open area (basically any blue area on the screen) or if it touches a bomb, a goon or the Goblin himself. Running out of web fluid will also cause him to fall, and depending on how high up he is you will have to watch him fall ALL the way down the building before he goes splat.

Using your webs to scale the building can be awfully fussy but mastering how to use different sizes of webs is key to mastering the game. Luckily, you can catch yourself with a web while falling down but it can be harder than it looks, especially in the girder sections where there isn’t much to hang on to. This franchise-starting game can be a lot of fun but just be warned that it will likely require some patience on the player’s part. C+

More Info: Spider-Man on AtariAge. For current listings of Spider-Man for sale on eBay, click here 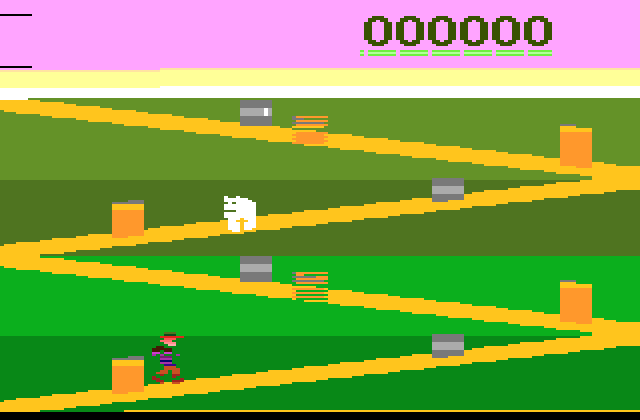 Is there an equivalent for PTSD for video games? I don’t want to apply such a serious condition for something as trivial as a video game, but I don’t have the words to describe how Spike’s Peak makes me feel. The lone true bummer in my childhood 2600 collection (coupled on a double-ender with the far-superior Ghost Manor), Spike’s Peak is a nightmare to play, and attempting it all these decades later brought back so much of the frustration and anger at this early attempt at a multi-screen platformer.

Spike’s Peak is a five-screen, multi-gameplay adventure in which you scale a mountain dodging hawks, bears, boulders and even an Abominable Snowman. You hike on the Mountain level, climb the Rocky Ledge, walk across a slippery ice cap and – finally – plant a flag at the top of the mountain. The game looks stunning; the hawk and the snowman are some of the best-animated sprites in 2600 history. But Oh My God that gameplay – the control seems to respond only when it feels like it half the time, more often than not putting you in the line of danger. The Rocky Ledge level is probably the most aggravating, with particularly sluggish control and the constant threat of rock slides forcing you right back down to the bottom of the screen.

I managed to get pretty decent at Spike’s Peak back in the day, but not without much Biblical weeping and gnashing of teeth. Bottom line: it sucked then and it sucks now. I’ve mentioned before that Xonox tended to put a lot of effort into graphics but frequently neglected to put a playable game in the cart. None of their titles highlight this as much as Spike’s Peak. A generous D- for the graphics alone.

The marketing of this first-person aerial shooter – one of two cartridges produced by Milton Bradley (the other being Survival Run) – made much ado of the “Flight Commander Controller” which came along with the game. Modelled after a turret gun, this controller purportedly offered a light-gun style experience when played with Spitfire Attack. I couldn’t even find the controller on eBay, but the Cosmic Controller – its cousin unit packaged with Survival Run – retailed for a cool $113 at the time of writing.

For a game heavily dependent on a gimmick (half of the game’s manual is dedicated to setting up the controller), Spitfire Attack is actually pretty good even without its much-touted special controller. The game doesn’t fret about fuel or ammunition levels like many dogfight sims – it just lets you free to blow airplanes out of the sky en masse. Unfortunately, that one-dimensionality is also Spitfire Attack’s undoing – some kind of secondary goal would have likely benefitted the game.

Why, why, WHY were there so many platformers designed for the Atari 2600 that cause your character to die if it falls by even a pixel-sized drop? It’s almost always a clear marker of a poorly-designed game and Springer is quite possibly the worst of this inauspicious bunch. The controls are among the worst I’ve ever seen on the system; you constantly double-bounce when you don’t want to, causing you to plummet to your death 90 per cent of the time. You’re supposed to collect a variety of objects including dragon’s eggs, which I couldn’t even get near without them hatching and killing me. And that’s pretty much the story of Springer: the developers were so focused on figuring out ways for your character to die that they left few avenues available for you to win. The game, which should have been a reasonably-enjoyable Kangaroo-style romp (Atari’s 2600 port of Kangaroo was no masterpiece either but at least it was reasonably playable), is virtually unplayable. It galls me that someone is going to pay a huge amount of money for this extremely-rare game (I mean, unless you buy it through my eBay link below, in which case I receive a portion of the profit – I’m such a hypocrite). F

More Info: Springer on AtariAge. For current listings of Springer for sale on eBay, click here