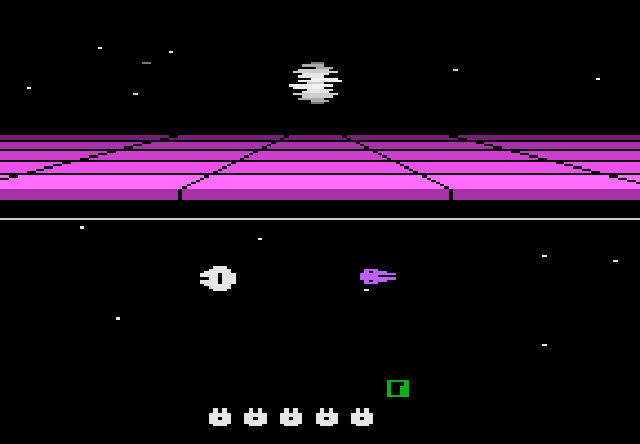 Parker Brothers’ Star Wars games were a mixed lot. Heavily promoted in comic books and contemporary video game magazines, they all looked really good, but aside from The Empire Strikes Back and The Arcade Game their gameplay was sketchy at best. In retrospect this should not have been much of a surprise; while excellent at producing credible ports of arcade games such as Frogger and Q*Bert, Parkers often struggled with its own ideas, sometimes developing games with gameplay bordering on the outright weird (G.I. Joe: Cobra Strike and Star Wars: Jedi Arena come to mind).

There are some good ideas in Star Wars: Return of the Jedi Death Star Battle (why the monster title? I suspect The Arcade Game was already in the works and they needed to differentiate) but they don’t add up to the sum of their parts. Starting with a gorgeous opening screen (the semi-constructed Death Star really does resemble the one from the film), your first goal is to shoot at TIE fighters while waiting for an entry to open up in the shield above you. But watch out! The outside grey shield flashes on and off intermittently and it is one of the many, many, many things that will kill you in this game.

Once successful, the game turns into a particularly frustrating round of Breakout as you attempt to shoot pieces out of the Death Star one by one, all the while avoiding the DEATH RAY! (the manual’s emphasis, not mine). This wouldn’t be so bad if you had more than the bottom half of the screen to accomplish this feat – you can’t attack from the side because then you wouldn’t be able to cross paths with the DEATH RAY! If none of this sounds to you like the actual Death Star attack in the movie, you’re not the only one.

The colourful, detailed graphics (basically, all the spacecraft look the way they’re supposed to) only render the poor gameplay of Death Star Battle even more disappointing. The audio will make you wish for delivery by tinnitus and the controls are like Wookiee snot. I always wanted this game when I was a kid but I can’t see my reaction being anything other than disappointment even back when I was just happy to have video games, period. D- 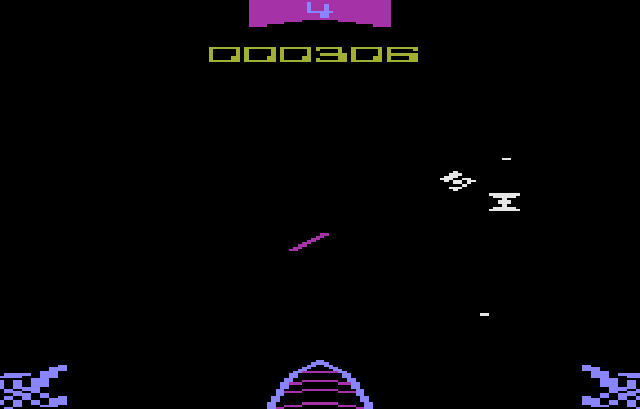 Wow – now this is more like it. Parker Brothers must have had a pretty ironclad deal with Lucasfilm to be able to snag the home rights to this gem, especially considering it was Atari that designed the arcade game. However, I can’t picture even Atari doing a better job than Parker Brothers did here. Regardless of its post-Crash 1984 release, this HAD to be the final palms-sweating-in-anticipation release for the 2600; I have no hard data on that, but how could it not? Look at all the games within alphabetical vicinity of this review that attempted to capture a little of that classic Death Star attack cinematic magic. And yet here we have the real, officially-sanctioned deal.

And not only that, but done so well. Not only are we treated to a two-part harmony take on the Star Wars theme, but also to the sight of TIE fighters whizzing across the screen at all kinds of angles in a manner equalling the Colecovision at minimum. Shooting them and the fireballs they launch at you is a sheer delight. The next phase has you scaling the exterior of the Death Star, picking off the tops of the cannons along the way. This isn’t the most challenging part of the game, but I find hitting them to be extremely satisfactory. Finally, you’re thrown right into the trench of the Death Star itself. This part is a little anti-climactic on the first round because you do not yet have the shield-sucking catwalks to avoid. But hey – it’s really only a practice level. Trust me: it gets more challenging.

Obviously, the 2600’s eight-direction, one-button controls are not as fluid as the arcade game’s more robust setup, but considering what Parker Brothers accomplished here that seems like such a petty complaint that it borders on the ungrateful. You must play Star Wars: The Arcade Game. A 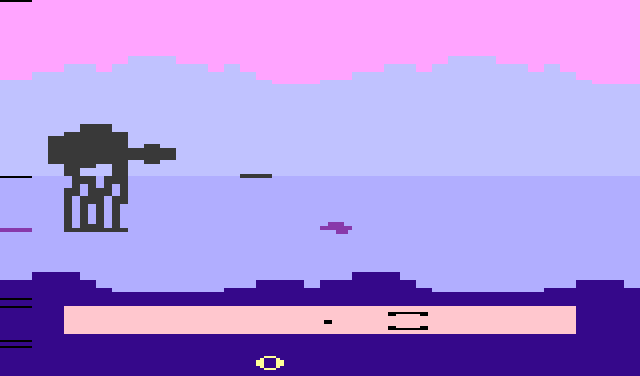 In which Parker Brothers scores a hit with a non-arcade-influenced, more or less original idea. Solid design decisions abound in The Empire Strikes Back from the choice of genre (side-scrolling shoot ‘em up), choice of scene from the movie (the attack on Hoth) and choice to infuse the fundamentally simple gameplay with strategy (check out the “Tips, Cheats and Easter Eggs” section at the AtariAge link below for an idea of what the game has to offer). Graphics, while blocky, pop by means of a well-imagined colour palette. It all adds up to one of the more underrated titles in the Atari 2600 library.

You use your snowspeeder to fight back against Imperial AT-AT walkers descending on the unpictured Rebel base. It takes 48 shots to destroy a walker unless – and this is the fun part – you manage to hit a periodically-appearing bomb hatch, blowing up the vehicle immediately. It takes a few shots from the enemy side to destroy your speeder and you have some recourse by settling in on a landing pad – which repairs your ship – or taking advantage of intermittent Force power which makes you temporarily invincible.

With no visual or auditory cue to signal completion (the AT-ATs simply go faster with each round of five), the game can become a trifle repetitive. It’s also a low-scoring game; I realize these kind of things are all relative, but it’s a little frustrating when you think you’ve had a good run but still failed to break the the five-digit threshold. Otherwise, The Empire Strikes Back is a very strong title and easily the second-best of Parker Brothers’ Star Wars series. B 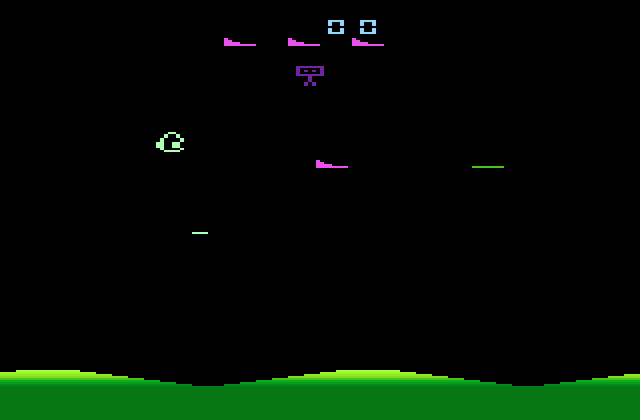 I wasn’t in the mood for another side-scrolling shooter, but Stargunner slowly won me over. Although its gameplay is largely pretty standard for its genre, there are enough small differences between Stargunner and other, similar games to set it apart from the pack.

One difference between Stargunner and the Defender side-scrolling template is that it’s not a continuous scroller; reaching the furthermost sides of the playfield causes your ship to warp to the other side, helping you sneak up on enemy spacecraft for a surprise attack (you can also easily run into them, so be careful). New enemy spacecraft spawn immediately every time you shoot one down. You really have to pay attention to the spawning process because they can appear virtually anywhere on the screen, including right on top of you. There’s a wide variety of colourful aliens, even if they’re mostly highly-detailed geometric shapes. A bombing ship you can’t shoot stalks the top of the screen, raining ammunition down on you even as you contend with your horizontally-fixed enemies. It all gets pretty frenetic, but delightfully so.

Be thee fairly warned: Stargunner is rated as “extremely rare” on AtariAge. If you can find it (or at least play it on emulator), I think you’ll be in for a badass experience. B

More Info: Stargunner on AtariAge. For current listings of Stargunner for sale on eBay, click here 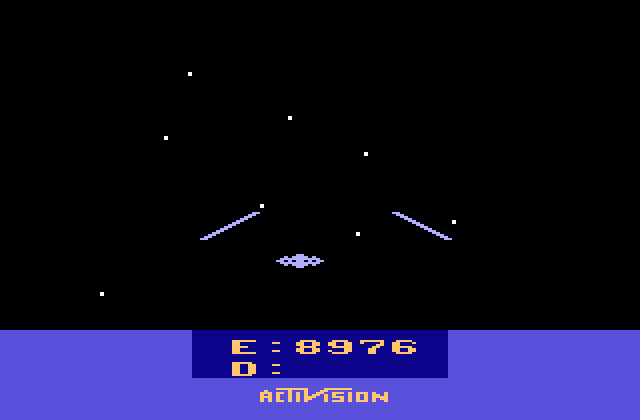 I wonder if Atari ever considered suing Activision for Starmaster. It is, for all intents and purposes, the same game as Star Raiders. The difference is Starmaster is by an order of magnitude more intuitive, more graphically-fluid and otherwise more playable than Star Raiders – at least when compared to the 2600 version. Any kind of legal action would likely have highlighted the inferiority of Atari’s product even more.

But don’t get me wrong: Starmaster is also HARD. I think I’ve only ever beat it once or twice on Ensign mode (the easiest variant). I think it only takes a couple of hits to destroy your laser cannons, shields or affect your warp power. Dogfights often involve a lot of evasion, but when you do shoot down an enemy vessel it’s enormously satisfying. Using the colour switch to turn your mapping computer on and off takes a little getting used to, but once established it’s far more intuitive than Star Raiders’ keypad controller, which made that game’s packaging nice and cool but wasn’t necessarily optimal for gameplay.

I’ve been comparing Starmaster to Star Raiders a lot in this review, but in fairness Starmaster stands on its own. I greatly enjoy it even though I’m hopeless at it. It was, in fact, one of the first carts I ordered off of eBay upon my rediscovery of the 2600 a dozen years ago. Starmaster starts out hard and gets harder with each variation, so there’s plenty to sink your teeth into here. B+

More Info: Starmaster on AtariAge. For current listings of Starmaster for sale on eBay, click here 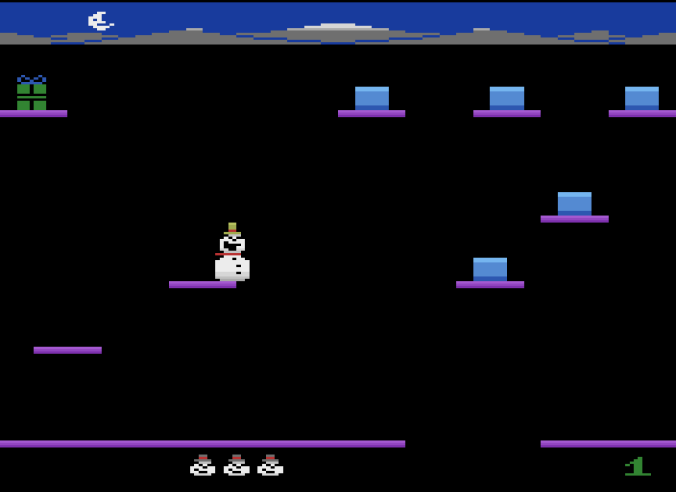 (Added October 19, 2018) Christmas always seems to bring out the best in the Atari 2600 homebrew community. Check out all these top-notch Christmas-themed ‘brews: Reindeer Rescue, Toyshop Trouble and the original Stay Frosty from the Stella’s Stocking AtariAge Holiday Cart from 2007. Just goes to show that the combined forces of E.T. and Pac-Man didn’t ruin either video games or Christmas for these intrepid homebrewers.

Programmed by Darrell Spice, Jr. (the music, graphics and packaging crew are all listed in the AtariAge store link below), Stay Frosty 2 is a massive expansion of the already pretty-cool Stay Frosty, featuring a breathtaking 32 different layouts which repeat for a total of 128 levels. The basic gameplay is much the same as the original (your snowman firefighter puts out flames while collecting ice blocks which keep him from completely melting) but there are way more complex puzzles (and let’s not kid ourselves: these are puzzles) that could keep you busy for as long as a modern game on a modern console.

There are little moments in this game that are really special. Just like the original Stay Frosty, your snowman’s facial expression changes intermittently depending on the situation he’s in. The fireballs look either angry or a little scared and it’s all brought about by slight changes in negative space. The animation of the hawks (at least they look like hawks to me) on the second level is simply beautiful.

Stay Frosty 2 is a mixture of Donkey Kong, the original Mario Bros and Lode Runner thrown in for good measure – all tied up in a big holiday bow with a Christmas carol soundtrack to boot (although the developers thoughtfully included an option to shut the music off). Although while playing the game I happen upon some things that bug me, by the end of my time with SF2 all is forgiven. B+

Stay Frosty 2 is available in the AtariAge Store. For current listings of Stay Frosty 2 for sale on eBay, click here