This new feature is pretty much what the headline says it is, but the real star here is the source material. A fellow traveller on Reddit found this scholarly page (http://mcurrent.name/atarihistory/wci_games.html) by Michael D. Current with the University of Wisconsin library department which chronicles the history of Atari from 1977 to 1992. This well-researched history – titled “A history of WCI / Atari / Atari Games / Atari Holdings” – has a little bit of everything: comings and goings of key executive personnel and programmers, changes in management and listings of planned projects, both those that came to pass and others which ultimately did not.

I focus primarily on software/hardware highlights here, mainly because I’ve received some inquiries asking for clarification on the actual release dates of various 2600 games. Current does his best here, relying mainly on the earliest appearances of ads in newspapers and industry periodicals he could find. Frequently, games were released later than the copyright year which appeared on the box, especially games released about three months before or after the New Year.

The link above is only one part of a bigger site called Atari History Timelines. I think you’ll find plenty to fall down the proverbial rabbit hole with. First (or last, or never), though, enjoy this small sampling for the month of May from 1977 to 1984.

Atari released the Sprint 8 arcade game under its Kee Games sub-label. This was the latest in Atari’s Sprint series and could support up to eight players at a time.

Atari announced four new titles for the VCS including Superman, BASIC Programming, Backgammon and Video Chess, each to ship by summer.

May 19-22: Atari featured the 400/800 personal computer systems at the 1980 National Computer Conference at the Anaheim Convention Center, Anaheim CA.

May 13: In the U.K., Atari International (U.K.) Inc. introduced Pac-Man for the VCS with a reception at the top of the London Hilton. 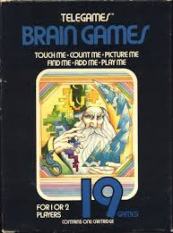 According to Video Game Update, Atari cancelled Dukes of Hazzard for the 2600 and Basketball for the 5200.

In coin-op news, Atari released Arabian by Sun Electronics, Star Wars (standup and cockpit, just in time for the release of Return of the Jedi) and Food Fight cocktail.

May 29: Sears released Tele-Games Submarine Commander by Atari for the 2600.

May 8:  Lucasfilm Ltd. and Atari Inc. introduced Ballblazer and Rescue on Fractalus! at the Lucasfilm Ranch in Marin County California. Both games were developed by the Lucasfilm Computer Division to be published by Atari and marketed under the new Atari/Lucasfilm logo for the 5200 and on cartridge for Atari home computers. Versions for other computers (including Commodore 64, Apple II and IBM) were set to be available by Christmas.

May 21: In perhaps our saddest entry, Atari held a press event in New York City to introduce the 7800 ProSystem which was set to ship in July 1984 with two Pro-Line Joystick controllers for a package price of $149. Atari also announced 13 games for the 7800: 3-D Asteroids (later known as Deluxe Asteroids but eventually shipped as simply Asteroids), Ballblazer, Centipede, Desert Falcon, Dig Dug, Food Fight, Galaga, Joust, Ms. Pac-Man, Pole Position II (planned to be built in to production systems beginning in September; would eventually be shipped with the 7800 as a standalone cartridge), Rescue on Fractalus!, Robotron: 2084 and Xevious. None of these products – including the 7800 itself – were released until 1986, with the exception of Ballblazer (released 1988), Desert Falcon (1987) and Rescue on Fractulus! (never released). Atari also announced the 7800 High Score Cartridge, the 7800 Computer Keyboard and a 7800 ProSystem Adapter for the Atari 5200. None of these peripherals were ever released. Atari disclosed that the 5200 was no longer in production; more than one million 5200s had been sold to date.